Advertisement
The Newspaper for the Future of Miami
Connect with us:
Front Page » Business & Finance » Depressed Europe trims visits to Miami 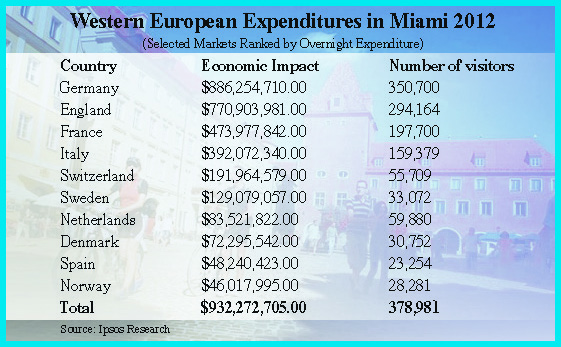 Depressed economies in France, Spain, Portugal and Italy caused tourism business from Western Europe to fall during the first half of this year.

Visitors from Western Europe generated more than $932 million for the local economy last year, according to information from the Greater Miami Convention & Visitors Bureau.

But Chris Mangos, director of the marketing division at Miami-Dade Aviation Department, said the industry suffered “disappointments as Europe continues to drag along halfway into 2013,” with a 2.3% drop in travelers to Miami International Airport.

But there’s also good news, tourism officials say, as arrivals from other European countries, such as Germany, rose during that same period. Germany is a valuable source of tourism revenue for Miami-Dade. Last year, 350,700 German visitors generated more than $886 million for the local economy.

There’s also growing interest in Europe, as airlines continued to expand services to the area. XL Airways France, for instance, added three weekly flights to Paris, in a move likely to boost revenue for the airport.

And Mr. Mangos said, “July and August figures should show some improvement in European traffic numbers as those are strong vacation months for many Europeans.”

Meanwhile, Miami International remained one of the busiest airports in the nation, recording a 4.2% hike in international traffic in the first six months of the year, bringing the total to count of foreign arrivals to 9.9 million by June.

But it was regional traffic  from Latin America and the Caribbean  that drove local tourism, officials said. Brazil, Colombia, Argentina, Peru and Venezuela were among the strongest performers.

It’s a trend officials expect to continue, especially with Brazil set to host the 2014 World Cup and the 2016 Olympic Games. New flights are already in the pipeline, with American Airlines set to add service to Curitiba and Porto Alegre later this year.

Once they launch, these flights will be the eighth and ninth destinations in Brazil with service from Miami International  the most by any US airport, according to the Aviation Department.

“For 2014, we as an airport and as a community should expect better than expected international visitations as well as through traffic as Brazil hosts the Olympics and the World Cup,” Mr. Mangos said. “With MIA’s air service to Brazil rising to nine cities as of this November, Miami will surely feel the wave of global traffic making its way south for these global events.”

Meanwhile in the Caribbean, arrivals from the Dutch Antilles  which consists of Aruba, Bonaire and Curacao  were also on the rise, boosting the region’s strong numbers.

“The source of the growth continues to be our bread-and-butter market of Latin America and the Caribbean, where traffic has grown 8.3% over last year,” Mr. Mangos said. “Certain markets are showing marginal to moderate increases, while in South America there were sizeable increases among some of the largest and traditionally strong generators of traffic to and through MIA.”