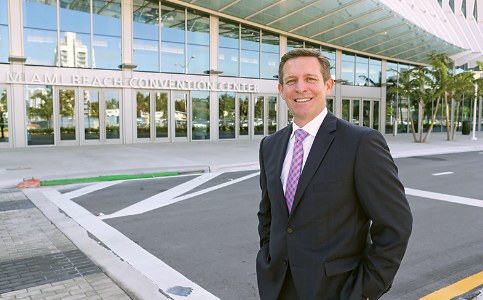 The Miami Beach Convention Center is preparing to welcome back Art Basel after last year’s cancellation with hundreds of temporary employees who are a mostly local workforce.

Art Basel organizers already started moving and preparing, since Nov. 16, day three of their preparations for the shows and exhibitions for this year’s fair, said Freddy Peterson, general manager of the Miami Beach Convention Center, in an interview last week. “We have hundreds upon hundreds of employees in the building helping to service Art Basel and get it well on their way.”

“In convention centers, much like stadiums and arenas, you have a lot of temporary employees that will come in and set up events, and then move out,” he said. “There is a lot more of the temporary labor force that is associated with conventions and meetings than really full-time employees.”

At the convention center, there is a full-time employee workforce that, on a 24-seven basis, takes care of the 491,000-square-foot “Miami Beach jewel,” said Mr. Peterson. Those employees are in charge of the maintenance, operations, the daily management and the safety and security associated with the building.

“And then you’re talking thousands of temporary employees that will come in – and then, depending on the size of the event – put in a tremendous number of hours,” he said, “because historically, you have three days of moving, then three days of the event, and then, normally, about three days to move out. All that nine-day period has a lot of work hours that are put in.”

“In the best of times, outside of the whole pandemic, you’re trying to basically layer in big shows, [along with] smaller events to really occupy that building, and to a point, drag economic impact; to put people to work, put food on people’s tables,” he said.

The majority of folks employed during Art Basel and other meetings and convention events are local to Miami Beach, he explained, depending on the need and the skill set. “But every single event that we do here is different and dynamic, and it has different needs. Sometimes you have specially builds that can be something unique and special.”

Since October 2020, the Miami Beach Convention Center has hosted 23 events, including five medical events. Among those were the first major medical event during Covid-19, the Aesthetics meeting, from April 29 to May 3; the Miami Cosmetic Surgery, from Aug. 25 to 28; FIME, from Sept. 1 to 3; and the American Academy of Periodontology 107th annual meeting, from Nov. 4 to 6.

“Even though everybody’s been struggling in different ways to get through the whole pandemic, we’ve been blessed and lucky enough to have the ability to host those events,” said Mr. Peterson.

With Art Basel being the 24th event after the convention reopened to events, he said, “we’re really putting thousands of people to work throughout that time. And if you think of the impact of bringing wonderful conventions, meetings and trade shows, that’s what runs the economy.”