Advertisement
The Newspaper for the Future of Miami
Connect with us:
Front Page » Top Stories » Greater Miami Chamber of Commerce repositions 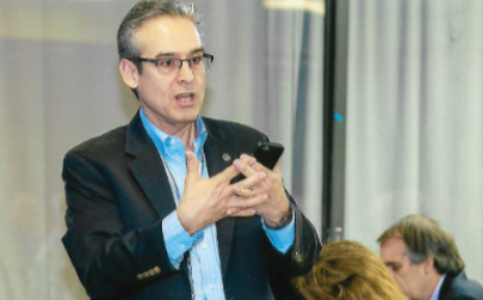 The Greater Miami Chamber of Commerce, which traces its lineage to 1907, is making a series of major changes that include a move to the heart of downtown from its quarters of almost 50 years as it seeks branding to bring in new members who fit the city’s recent focus on finance and technology.

The chamber announced this week that it aims by February to be in a new 3,244-square-foot site on the 14th floor of the SunTrust International Center office building at 1 SE Third Ave., vacating an 8,000-square-foot site at 1601 Biscayne Blvd it had occupied since the complex was branded the Omni hotel and shopping center. The new suite was one of a number in the building that had been listed for rent at $42 per square foot.

The move is part of new look for the chamber, which is modernizing its operations and look. It has put most of its documents in the cloud and plans to scan in the rest, all staff members are on teams that can access information everywhere, and they aren’t going to be in the office 40 hours a week but out in the community.

In other changes, the chamber no longer gives members paper agendas at meetings and is headed to a new website and maybe a new logo, though that isn’t decided, said President and CEO Alfred Sanchez, who is wrapping up four years heading the chamber, which he says has about 800 member organizations.

“I think that’s going to grow because the new health program that we’re providing is going to be extremely attractive to small businesses,” said Mr. Sanchez, who noted that the pooling of members for health insurance took three years to make it through the state’s Office of Insurance Regulation in Tallahassee. It’s the only chamber in the state doing this, he said.

Under the program, called the Greater Health Trust, in partnership with locally based AvMed “you could see 30% less” insurance costs, he said.
That program just began this month “This is the first wave of insurance underwriting that we’re doing” to get members on the plan by Jan. 1, which is the big wave of insurance start dates for companies. The chance to achieve big savings for members, he said, should lure small business members to the chamber.

In another move, Mr. Sanchez said, the chamber is about to dust off its long-time senior executive orientation, fueled this time with a $150,000 county grant and a working relationship with the county, the Beacon Council and Miami’s Downtown Development Authority.

The old program assembled incoming top executives that local businesses had brought from out of town and educated them on how Miami-Dade works. The executives and their spouses met and attended events together for five months to move into the community’s establishment.

But five months is a long time in today’s fast-paced environment, said Mr. Sanchez, who went through the orientation when he first came to Miami in 1995. So the program is being retooled as a six-week deep dive into Miami dealing with our major issues.

The deep dive program – a label Mr. Sanchez said is merely a working title and not a formal name – plans monthly dinners that he calls curated collisions, bringing perhaps six new CEOs together with six CEOs who have been here a while to get the new CEOs attached to established leaders and connected immediately to the chamber, “solving the problems and addressing the issues in Miami almost immediately,” he said.

The program isn’t yet firmed up – the chamber is still designing it with the county, Mr. Sanchez said, but the first class is expected in March, one of three to four classes per year.

How will the chamber reach these new CEOs? Most meet with Mayor Daniella Levine Cava as they go to the county for incentives, services and aid, said Mr. Sanchez, and she will refer them to the program. Other chamber members and the cooperating organizations, he said, will also send new CEOs the chamber’s way.