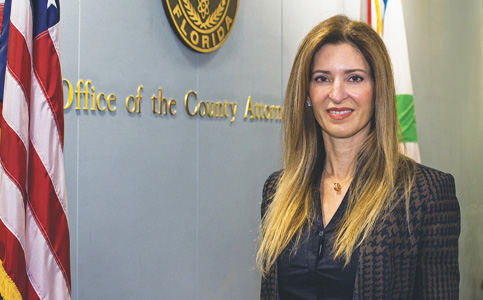 Since a very young age, Geri Bonzon-Keenan has had an interest in public service. Both her parents were public servants, and years later she is fulfilling a dream. “For me, it’s an honor and a privilege to serve as the county attorney,” she said.

Prior to this, she was second in command as the first assistant county attorney. During her 26-year tenure at the office, Ms. Bonzon-Keenan has worked with commissioners and the mayor, has developed legislation for consideration by the commission, and worked in many practice areas. She also represents county departments, “sometimes maybe too many to count,” she said.

Looking back, Ms. Bonzon-Keenan remembers with great esteem her experiences at the satellite office of the county attorney in Miami International Airport. She advised the Aviation Department in financing, procurement, real estate and airport security.

She also helped with a large capital improvement program for the North and South terminals. “I liked the diversity of the issues that you could be presented with at any given moment,” she recalled. “The airport is similar to a corporation that provides enormous service to the community.”