Advertisement
The Newspaper for the Future of Miami
Connect with us:
Front Page » Healthcare » New Mount Sinai Cancer Center in design 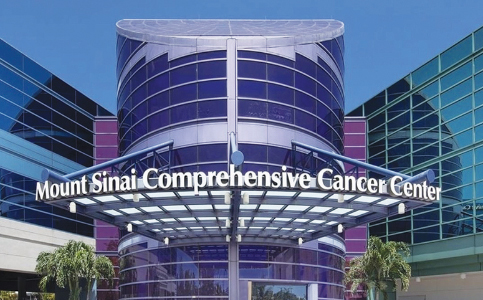 After getting approval from Miami Beach city commissioners in August for use of up to $150 million of Health Facilities Authority Hospital Revenue Bonds, Mount Sinai’s cancer center development project is now in the programming and design phase, said Gino Santorio, the hospital’s president and CEO.

“It’s a brand-new building that will replace the existing comprehensive cancer center that we have, which will be repurposed,” Mr. Santorio said. “The purpose of the new cancer center is really about right-sizing the facility because we’ve outgrown it, and there’s a significant increase in cancer incidence rates projected by 2035.”

The hospital has partnered with Columbia University in New York to finalize the programming, which constitutes the specific technologies that are going to go into the new cancer center, as well as the sizing and the placement, Mr. Santorio explained. “Once we finalize that, the next step is then going out to the city and work with the design review board to get approval on a finalized program plan, and then we can move forward with breaking ground and getting this center up and running.”

Gathering data from IBM Watson and independent cancer data, Mount Sinai is planning to meet the demand of a 12% cancer incidence rate increase by 2030, he said. “But because we’re building a new facility, it also gives us the opportunity to really bring in the latest technology, which includes cutting-edge radiosurgery availability and radiation oncology suites with linear accelerators.”

Timing of completion is a little bit premature, Mr. Santorio added, due to milestones and dates that could change significantly depending on what is finalized with programming. “I would say in 2024 or 2025, somewhere around there, but it’s really too early to give any more precise timeline,” he said.

The design and development of the cancer center are projected to use the full $150 million amount in revenue bonds, he said.

“We still don’t know exactly how much it will cost, just because a lot of that depends on the identification of what we’re putting in there and how it gets designed, but it will definitely be some level above the bond. The rest of the funding will be raised through a combination of philanthropy and operations.”

The center is planned on the corner of the Miami Beach Campus at 4300 Alton Road overlooking the bay.

“Cancer patients who are getting infusion could be at the center for six hours, which is a very long time, but they will have a beautiful setting,” Mr. Santorio said. “It’s going to be one of the nicest healing environments for them to get treated.”