Advertisement
The Newspaper for the Future of Miami
Connect with us:
Front Page » Education » Holocaust Memorial Learning Center may be 5 years off

Holocaust Memorial Learning Center may be 5 years off 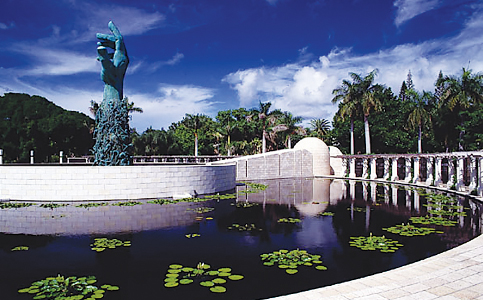 The Holocaust Memorial in Miami Beach might have gained the city-owned adjacent surface parking lot for the development of a learning center, after the Nov. 2 referendum vote showed that the majority of residents favor its construction and an extension of the current lease.

The Miami Beach City Commission unanimously passed in its first and second reading, in March and July, the resolution that seeks to donate the 30-space parking lot – a 12,000-square-foot lot at 775 19th St. – to build a 7,000-square-foot learning center, “a series of circular forms” complementing the 51-foot-tall hand sculpture, said its designer, Architect Ray Fort from Arquitectonica, last March in a Finance and Economic Resiliency meeting.

The 30 parking lot spaces would be replaced by parallel parking spots on 19th Street.

Now, with the referendum approval, the Design Review Board will have 25 months after the date in which the amendment is effective to approve the lease. After that, the Greater Miami Jewish Federation, the organization that operates and programs the Holocaust Memorial, will have three years to construct the educational center, “a single-story structure with a reception area, two exhibition rooms and a flex classroom which may open up to the outdoors,” said Mr. Fort.

“We’re very excited about the outcome of the referendum,” said Jacob Solomon, president and CEO of the Greater Miami Jewish Federation. “The goal of the expansion is to provide space and new technology to enhance the mission of the Holocaust Memorial.”

The learning center would also allow for a gift pavilion that would sell commemorative pictures and a 1,000-square-foot café.

“The design work is largely done,” said Mr. Solomon. “We’re still putting the final touches on some outstanding issues and the city has been extraordinarily supportive and cooperative. So we hope to get to work in drawings that would help within the next month or two.”

The Nov. 2 referendum was approved with 79.65% of city voters agreeing with the expansion of the memorial and an extension of its current 99-year lease to the Jewish Federation that began in 2000. The federation operates and maintains the property as part of the lease terms, and once the education center is built, it will be in charge of financing operations, programming and maintenance.

The federation gets its funding from donations. Mr. Solomon said it would be raising money for the construction.

“[Covid-19] has not affected financial support.” he said. “We’re grateful that the community, both Jewish and non-Jewish alike, continues to support the Memorial Federation, so there has been no financial impact.”

However, Mr. Solomon added, “the pandemic has been quite a significant challenge. Obviously, no school groups came to the memorial last year, because schools were not in session in large [numbers], and field trips were out of the question.”

The Jewish Federation would partner with the Shoah Foundation of the University of Southern California to bring Dimensions in Testimony, a project that utilizes holographic image technology to enable visitors to ask up to 600 questions and get answers from holographic pre-recorded video of Holocaust survivors.

“The age of survivors is increasing and fewer and fewer of them are able to sit in a classroom environment or at tours in the memorial,” said Mr. Solomon. “So this will give groups and visitors an opportunity to interact with them. This will expand the number of people who can benefit from the education content of the memorial and also take advantage of 21st century technology in a way to make the educational content more compelling and engaging.”

The Holocaust Memorial in Miami Beach runs programs including the Yad Vashem Educational Initiative, which through grants takes South Florida educators to Jerusalem for 10 days. Another is the Young Lion of Judah Program, which pairs 25 students and their parents with Holocaust survivors to learn firsthand about their stories; and the Zachor Society, which works to preserve and expand Holocaust education through the community.

The memorial with the Jewish Federation also programs tours to school students and seminars. In 2019 nearly 100,000 people and 11,000 students from South Florida visited. The federation, Mr. Solomon said, supports a wide variety of educational activities organized through Miami-Dade schools and informal teen programs. “We are in fact scheduling school groups to come again, so we’re expecting this year’s numbers to be back up.”

“Holocaust education, especially in this era of significant increases in anti-Semitic events, is extremely important to us,” he added. “When we have a rally against anti-Semitism it’s against hate of all kinds. Whether it is racial hatred or intolerance of LGBTQ+ people or anti-Asian hate crime, we are very active in fighting intolerance, bigotry and all kinds of hatred.”

Mr. Solomon also said the City of Miami Beach has cooperated fantastically with law enforcement for events at the memorial.

“The Holocaust Memorial is among the most popular attractions for tourists in Miami Beach,” he said, “and the city has been a tremendous champion in encouraging the schools in Miami Beach to take advantage of the memorial; to take kids, to take groups there, and to encourage people to visit. I think the leaders of the city recognize that fighting hatred and fighting anti-Semitism is important to building a civil society, which is the obligation of every citizen of our country.”