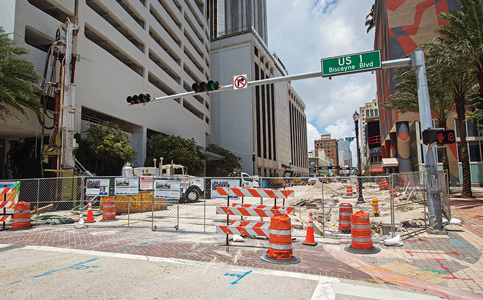 Also on the bill this year for downtown, the committee was told, are a blockchain technology conference and Olympic-style basketball tournaments for both men and women.

“With the $27 million huge investment that is going into Flagler and all the development and all the things that have happened already and everything that is to come, this is a time when we feel that this is a new era for downtown Miami,” said Marta Viciedo, founder of Urban Impact Labs, who requested $250,000 for art downtown.

“With help of DDA staff we’ve brought on a significant number of sponsors and we’re working on bringing on more. What we’re here to do today is ask for financial support. We haven’t asked for dollars for this event from the DDA. This isn’t about one week or day, it’s about continuing art downtown for years,” Ms. Viciedo said.

“In addition to financial support, we need DDA support,” she said, “things like permitting street closer and getting the street murals up. And simple things like cleaning the streets. There are little details that needs to be worked out so the street is ready to welcome thousands of people.

“It brings roughly 80,000 people downtown. We’ve been working with local hotels and many are booked already, or nearly booked,” Ms. Viciedo said. The allocation would support artists, the production, needed set-up, the permitting and police hours, she said.

“We are still trying to figure out the dollars,” said Christina Crespi, DDA executive director. “We will look at budget, talk with committee chairs and figure out what we can do.” The DDA approved $90,000 earlier this year for Urban Impact Labs for branding. Ms. Crespi suggested Ms. Viciedo attend the DDA board meeting Oct. 29 to further discuss Flagler Street Art Festival finances.

“Flagler Street Art Festival is divided into different parts. One is called ‘Illumia,’” Ms. Viciedo said. It is the street festival that is bringing different digital art and a non-fungible token (NFT) experience to the street.

“We are talking about closing down Flagler for an entire week, pedestrian-only traffic, filling it with projections, with live art, with street lounges. We just confirmed a partnership with SuperRare, a company that buys and sells non-fungible tokens, who will be bringing a 24-foot digital installation to the street. Most importantly, grounding this one block of Flagler Street as this central gathering point,” Ms. Viciedo said. There will be information booths, walking tours or self-guided tours to help individuals navigate downtown, she said.

Another division of the Flagler Street Art Festival is the mural festival. “It is a very interesting opportunity for the neighborhood,” Theodore Ward said. “We’re looking at this over the long term. We believe that Flagler should be the center of Miami for commerce, energy and entertainment. The best way to jumpstart that is to get foot traffic down there.”

Organizers are using Miami Art Week to create 15 to 20 large-scale, well-curated murals that will bring attention to the neighborhood for art lovers, he said. “We are looking at public-art installation and ways to open up the availability of public art for the general public year-round.”

Another part of the art week will be an NFT conference hosted Nov. 30 at FTX Arena, putting the focus on the blockchain technology, according to Ms. Viciedo.

“About two months ago we decided that there were a lot of small gatherings planned around NFTs, but there was no one gathering point. So what we’ve decided to do is lock in a series of large speakers in the arena and really bring the center of gravity around this subject to DT,” Mr. Ward said.

Another upcoming downtown event is the nonprofit International Basketball Federation, or FIBA, bringing the three on three, 3X3 AmeriCup to Miami from Nov. 12-14. Camilo Romero, head of development of FIBA in America, said “we’re bringing together 212 international teams. In the Americas, we have 42 national federations representing us. Our global headquarters are in Switzerland, but our headquarters in America is in Miami. We moved in 2020 from Puerto Rico.”

“We have two basketball types. We have tradition basketball, which is five on five. We also have three on three, which we call 3X3.” According to Mr. Romero, three on three basketball officially became an Olympic sport in the 2020 Olympics in Tokyo.

“The first-ever AmeriCup to be in the Americas will be brought to Bayfront Park,” he said, with 33 international teams coming, representing 18 different countries. “It will be bringing the best 3X3 in the Americas. It will take place for three years in Miami. We are hoping it will bring attention and be an asset to downtown.”