Advertisement
The Newspaper for the Future of Miami
Connect with us:
Front Page » Communities » Underline linear park starts next phase, with traffic detours 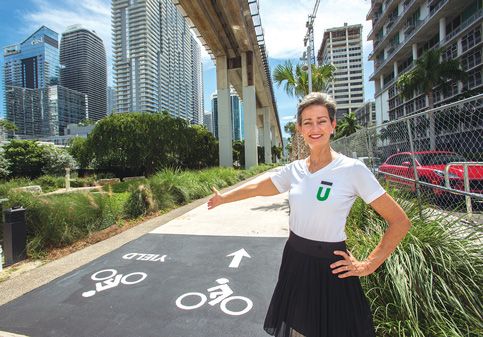 Miami-Dade County’s signature linear park and urban trail project, the Underline, is on its way to deliver the second phase of its development, with the construction of a 2.14-mile segment connecting Southwest 13th Street to 19th Avenue.

The project, which is now estimated to cost around $141.2 million, came to life with the public-private partnership of the Miami-Dade Department of Transportation, the Public Works and the Parks, Recreation and Open Spaces Department, and Friends of The Underline, a non-profit organization whose mission is to deliver this 120-acre linear park that covers 10 miles of the area under the Metrorail.

“The project is really about improving our quality of life, improving connectivity, walkability, bike-ability, and making a space where people can come together and connect with nature and the outdoors,” Meg Daly, founder, president and CEO of Friends of The Underline, said Tuesday.

Phase Two will enhance pedestrian and bicyclist safety, according to a statement from Friends of the Underline, with bicycle trails in five segments of park.

“Efforts are being made by [the Department of Transportation and Public Works] to minimize the impact of the construction activities on area residents, pedestrians, bicyclists, Metrorail and Metrobus,” the statement said.

“In addition to the trail,” Ms. Daly said, “there will be a very large nature-inspired playground, a complete redesign of the Vizcaya Station, an activation area for events and programs and beautiful native gardens.”

The Underline in its totality, which is expected to be completed in 2025, will be built through three phrases. Phase One started December 2018 was completed, and opened Feb. 26 with the construction of Brickell Backyard, a half-mile segment of the project running from 13th Street to the Brickell Metrorail Station, at an approximate cost of $14.2 million. The segment features biking and walking trails, a basketball and a soccer court, an outdoor gym, gardens and gathering areas. Phase Two is estimated to cost $18 million and Phase Three, a 7-mile segment connecting Southwest 19th Avenue through Dadeland South Metrorail Station is estimated at $109 million and is currently in the Miami-Dade County procurement process.

This project will be Miami-Dade’s first multi-mode corridor, according to the Department of Transportation and Public Works, “uniting all modes of transportation enhancing accessibility to eight Metrorail stations within its path and the neighboring communities.”

The Underline project, progressing in this second phase, said Ms. Daly, “is a really unique approach to bringing gardens into this urban, dense but single-family residential neighborhood.”