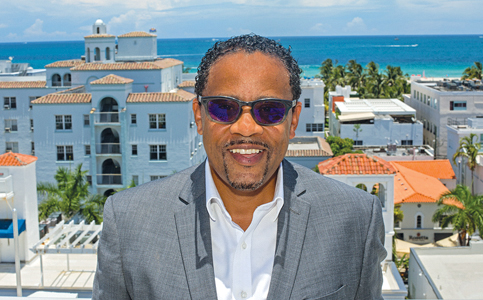 After years in and around the music industry, first as a child prodigy and later as the vice president of Experience Hendrix, the estate of legendary rock guitarist Jimi Hendrix, Troy Wright took his talents to South Beach and used them to build up the young Washington Avenue Business Improvement District.

As a child in Washington state, Mr. Wright grew up playing drums in church, eventually traveling to perform at large Seattle arenas by the time he was graduated from high school.

He would go on to start the Washington State Mass Choir, which became the first in the state’s history to hit the Billboard Top 40. The organization, he said, was no small group; it featured over 100 voices from members of different denominations and communities.

However, Mr. Wright would eventually leave the choir to work with the family of another Seattle music icon: Jimi Hendrix. After fighting for two and a half years to help the family keep the rights to Mr. Hendrix’s music, Mr. Wright took on the role as vice president of his estate.

From there, he traveled the world looking for old masters and put together “First Rays of the New Rising Sun,” a compilation album that would be the first record overseen by the estate.

“It was the most incredible experience,” he said of the role.“Can you imagine being able to hear Jimi Hendrix outtakes the world has never heard?”

When he ultimately decided to leave the organization, Mr. Wright had multiple opportunities to pursue another music industry job, but instead he moved to Miami Beach. As executive director of the Washington Avenue Business Improvement District, he now uses his skills and knowledge of the promotional, event planning and entertainment industries to contribute to the success of the iconic Miami Beach avenue.

He is also working on another music-related project, a book that will center on Miami’s historic Overtown neighborhood and explore the rich history of the city once dubbed “The Harlem of the South” for the sheer number of legends like Billie Holiday and Louis Armstrong who stayed and played there.