Advertisement
The Newspaper for the Future of Miami
Connect with us:
Front Page » Government » The battle over when new courthouse can open, and cost

The battle over when new courthouse can open, and cost 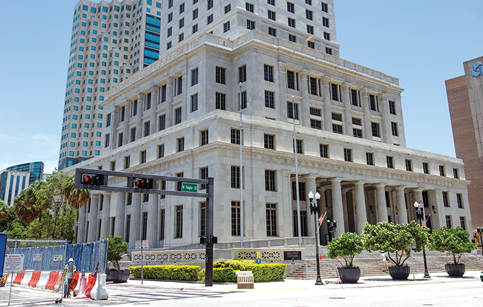 As workers from the 93-year-old decayed and closed Dade County Courthouse do their jobs at home, the county and the developer of a new courthouse rising next door negotiate when in 2024 the new structure will open and how much more taxpayers will pay for delays.

The county is pushing developers to find time savings and get the new courthouse open sooner. Meanwhile, developers have asked the county for a second schedule extension.

The first pilings of the new courthouse, the first public-private social infrastructure project in the county, are to be tested this week and the excavation wall is to done this month, county officials say.

Once the project is finally complete, the county is to pay $25.4 million the first year and $852.2 million over the life of a 30-year contract that was signed after earlier attempts to have the county build the project itself failed to win commissioners’ approval.

Right now, the design portion is under the ‘95% construction documents’ phase. Final comments by the county’s design team, and final county review and approval, are still pending.

Once the test piles are checked and the excavations wall is done, piles can be driven. Foundation excavation would start in early October, Mr. Silva said.

Plenary Justice Miami, the project’s development team, continues negotiating a completion date with the county. Mr. Silva said the official occupancy date remains Jan. 24, 2024, but “the developer is requesting a time extension for unforeseen delays during installation of utilities.”

Miami Today reported in February that Plenary Justice said the courthouse won’t be ready for use until Aug. 14, 2024. The group has asked Miami-Dade for a second schedule extension, a report from the group showed.

At that time, Frank Suarez of Miami-Dade Internal Services, the county’s project manager, told Miami Today that he and his staff were “doing our own pushback” on Plenary Justice’s latest extension request. As the project moves ahead, the county is still asking the developer to pinpoint areas where time can be saved, Mr. Silva said.

Plenary Justice last year reported major obstacles that set back the start of work. Mr. Silva said that now most of these have been remediated.

An on-site conduit duct bank controlled by FPL that also serves the nearby Metrorail station had to be moved. “This work was completed on March 17, 2021, and is currently serving the Metrorail system,” Mr. Silva said. “The total costs for this work was $1,026,824 and was split equally between the County and FPL, each paying $513,412.”

An access manhole to underground utilities that the county’s information technology department used for the old courthouse also had to be moved, a task completed in February at a cost of $358,960, Mr. Silva said. A 5G utility pole found on the southeast corner of the courthouse footprint was removed May 20.

Old Crown Castle fiber lines and conduits were relocated Feb. 15, at a cost borne by Plenary Justice. And a portion of a chilled water line relocation, needed to allow foundation work, was finished June 7.

At the project’s outset, the company was expected to spend $267 million for construction. But these setbacks caused unexpected costs.

“The cost for the unexpected delays is being negotiated with the developer. It is not known yet whether a financial impact for delays will be agreed upon, if any,” Mr. Silva said.

As talks go on, the old courthouse’s workers stay home while major repairs are made there. That was decided right after the Champlain Towers South condo collapsed, prompting an engineer’s report that pointed out several concerns at the old structure.

Mayor Daniella Levine Cava said then in a statement that the county had “identified safety concerns with various floors” and that “this was known and the activities had continued, but given the circumstances, we’ve already authorized that repair work to begin.”

“The plan is for the courts to operate from the Dade County Courthouse until the new Civil and Probate Courthouse is opened,” Mr. Silva reiterated.

The 640,000-square-foot building that will rise next door is to have 46 courtrooms, with shell space for four more, plus parking for 59 vehicles and offices for court administrative and clerk personnel.

2 Responses to The battle over when new courthouse can open, and cost