Advertisement
The Newspaper for the Future of Miami
Connect with us:
Front Page » Government » Miami may forgive millions in Jungle Island debt 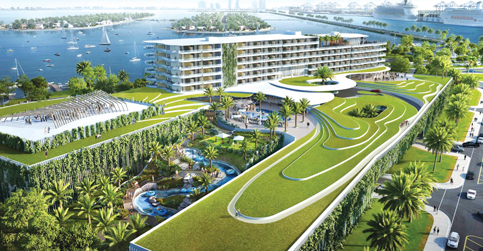 The Miami City Commission plans to consider amending a development agreement with ESJ JI Leasehold LLC to pay a portion of a loan given by the city to the original lessee for construction and operation of a hotel at Jungle Island on Watson Island in exchange for the project being completed by 2026.

That would require ESJ to show a certificate of occupancy for the hotel.

The vote today (7/8) on whether to move forward with an amended agreement would allow ESJ JI Leasehold to pay a $8 million lump sum on the original $13.8 million loan made in April 2000 to prior lessee Parrot Jungle and Gardens of Watson Island LLC and the remaining balance of $5,821,923 would be reduced by $2 million if paid by Jan. 31, 2028.

Should the commission vote to approve the legislation, the city manager – with advice from the city attorney – would be authorized to execute the amended development agreement.

The City of Miami owns the 19.3 acres at 1111 Parrot Jungle Trail, known as Jungle Island. The city leased the property to Parrot Jungle and Gardens Inc. with a lease and development agreement on Sept. 2, 1997.

On Jan. 9, 2001, Miami-Dade County made a $25 million Department of Housing and Urban Development (HUD) guaranteed loan to the prior lessee for construction and operation of the Parrot Jungle and Gardens of Watson Island project.

ESJ has agreed to pay part of the city’s portion, or $8 million, within 12 months, following the approval and execution of a second amendment to the development agreement by the city and county. That leaves about $5.8 million as the remaining balance of the city’s portion.

Miami’s Department of Real Estate and Asset Management is recommending that the city accept the discounts in an effort to collect a majority of a long outstanding debt and to enable ESJ to get financing needed to complete construction of the hotel and additional improvements required in the lease. The department’s recommendation also is to improve the city’s position on future rents from ESJ.

2 Responses to Miami may forgive millions in Jungle Island debt