Advertisement
The Newspaper for the Future of Miami
Connect with us:
Front Page » Transportation » Portugal seeks trade and PortMiami agreement 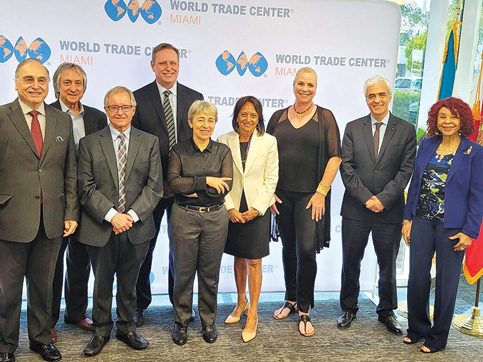 A delegation of Portuguese officials including the ambassador of the European country in the U.S. Domingos Fezas Vital, the Secretary of State of Diaspora Communities Dr. Berta Nunes, and the Honorary Consul in Miami Carolina Rendeiro met at the World Trade Center Miami (WTCM), to let their trade and logistics partners in South Florida know that they are open for business.

After a year full of difficulties in international trade due to the health crisis, the European authorities considered it important to visit Miami and discuss the status of the commercial relationships among ports of both nations.

Ms. Rendeiro said in an interview that Portugal is interested in signing additional port agreements with the ports of Lisbon and Leixões. “At the port of Leixões we are sending an MOU (Memorandum of Agreement). We would like to go over there with an outbound delegation not only to the port signing but to the view of other things,” Ms. Rendeiro said. “We have already talked about it and the Port of Miami is in agreement to do signings with them”.

Back in 2019 there were conversations with the Port of Miami on the matter, but the pandemic halted those efforts. Now Portuguese officials are working to bring attention to the nation’s trade relationships in South Florida. “That was discussed not only at the meeting in the World Trade Center, but also at the mayor’s office, the mayor of Miami-Dade County [Danielle Levine Cava]. We had a one hour meeting with her as well,” Ms. Rendeiro said.

The honorary consul added that Portugal is looking for people interested in investing and opening their businesses there, but also, the nation is looking to bring Portuguese businesses to Miami. “It’s a two-way street. And I think we will see it in health care, in aviation we are already here in the states, we are definitely seeing it in the entrepreneurial sector of startups, not only on talent but also on an industrialization type of conversation in sustainability.”

Manuel (Manny) Mencia, senior vice president of the International Trade & Business Development division of Enterprise Florida Inc. (EFI), and board member of the WTCM, was at the meeting and said that expanding ties with the European Union is a priority for Enterprise Florida.

“While Latin America remains the most important region of the world for international trade, it will probably be wise for us and our client companies to look into opportunities in the developed world. Of course, Portugal is an area that does have a level of cultural affinity given the fact that we have a sizable Portuguese-speaking population, mostly from Brazil,” Mr. Mencia said.

Portugal’s total annual trade with the United States was $565.46 million as of April, according to information provided by WorldCity Inc. The European country is also ranked No. 56 among US trade partners, and for the same month last year was listed No. 53.

The same data reveal that the main exports by value to Portugal were liquefied natural gas, other petroleum gases, aircraft engines and parts, and low value shipments. The main imports include gasoline and other fuels, rubber tires, and natural cork.