Written by Susan Danseyar on May 18, 2021
Advertisement 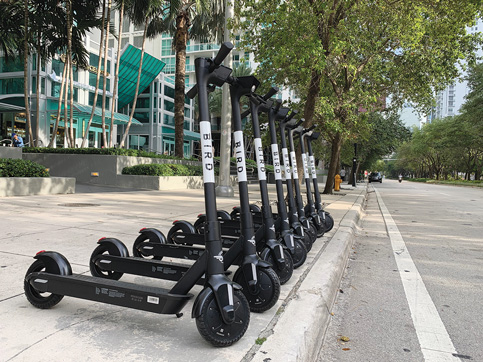 Electric scooters can roll through Downtown, Brickell and Coconut Grove at least until June 24, when the city commission is to decide if enough safety measures are in use for the latest of a series of pilot scooter programs to continue.

During a discussion last week on whether to halt the pilot pending a Request For Proposals to find four companies for a permanent program, commissioners voted to keep it going for six more weeks.

Alex Diaz de la Portilla, who proposed legislation to interrupt the program, said he doesn’t want Miami to be the guinea pig or residents risking themselves for an experiment. “I want to suspend it until further action from the commission, either when the RFP comes out or we agree there are enough safety measures put in place so far,” he said. “My concern is if something happens while there’s a pilot program.

Vice Chairman Ken Russell said he’d like the pilot program to continue until the RFP goes out because he, his staff and city departments are learning what is working and what more must be done as they tweak the program. “If we stop it, we’re not going to learn more so we can issue the RFP,” he said.

Mr. Diaz de la Portilla’s motion failed but, at Jeffrey Watson’s suggestion, commissioners voted to stop the pilot for a period if necessary. “This is affecting other districts as well when kids may be parking the scooters in areas other than District 2,” Mr. Watson said, adding that he has heard complaints from constituents in his district.

City administrators will ask companies in the scooter program to make sure geo-fencing technologies are in place so that scooters can’t leave Mr. Russell’s District 2.

The program has always required that riders be at least 18 years old and only operate the scooters in the street.

New regulations will require that all companies place decals on their scooters. The scooters must have a big sticker that people can easily read and, if necessary, use to report reckless driving.

A 10 miles per hour slow zone will apply on Biscayne Boulevard and Bayfront Park. Everywhere else, the speed limit will be 15 miles per hour.

The pilot program had nine companies but the number for the permanent program will be cut to four. The companies will be required to reduce their fleet by 25% so fewer scooters will be on the road. Each company will be allowed a maximum of four scooters per linear block at drop-off time in the morning.

There will be about 100 corrals with an incentive for riders to park at a discount. Riders will be able to see on a map where the corrals are located.

Group rides won’t be allowed. For better accountability, there will be one scooter per account.

Electric scooters got mixed reviews when they were first deployed throughout the city early in 2018. A lack of regulation and direction led to complaints, but some officials cited positive aspects that could help ease growing traffic gridlock.

The city attorney’s office went after operations of the scooters via cease and desist letters, and most scooters were removed from the streets.

Since then, scooters have gone through a series of pilot programs, all in Mr. Russell’s district as other commissioners opposed them in their own areas.

One pilot that ended in August 2019 had been proposed for a year but eventually was for six months. Scooters later met a shut-down period during the pandemic.