Advertisement
The Newspaper for the Future of Miami
Connect with us:
Front Page » Government » Electric fire truck from Austria may serve us for $1.3 million

Electric fire truck from Austria may serve us for $1.3 million 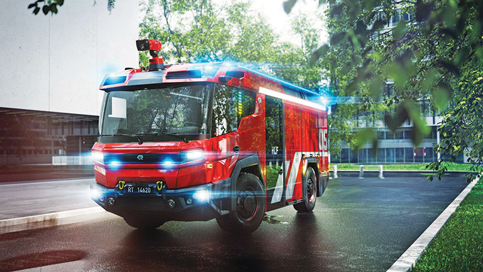 A resolution by Jose “Pepe” Diaz now moving through the Miami-Dade Commission would, if approved, direct Mayor Daniella Levine Cava’s administration to pay up to $1.3 million for an electrically powered fire truck by manufacture Rosenbauer America, which describes itself as “the largest fire truck apparatus and emergency response vehicle manufacturer in the world.”

Mr. Diaz’s item cleared the county’s Community Safety and Security Committee this month. It requires one more vote to pass.

Funds for the purchase will come from next year’s fire district operating budget.

Miami-Dade Fire Rescue (MDFR) personnel this year saw a demonstration of a concept vehicle upon which the one the county is contemplating buying is based. Rosenbauer began giving demonstrations of the vehicle, which is smaller than a traditional fire engine, to cities and counties across the US in 2019.

“In addition to having almost zero emissions, eliminating carcinogens and being close to silent, which significantly reduces noise related stress at incidents,” the memo said, “the vehicle has all-wheel steering for extra maneuverability and a turning radius less than half of traditional pumpers, [as well as the ability] to travel through water up to 36 inches deep, functioning as a rescue vehicle during flood conditions.”

Rosenbauer now builds the vehicle in Austria. Only 15 build slots are available this year. Los Angeles, Portland, Vancouver, Amsterdam, Berlin, and Dubai expect delivery of their own Rosenbauer electric fire trucks in December.

If demand is high enough, the company said it will open a US assembly line.

Whether that happens before Miami-Dade receives a vehicle remains to be seen.

“Upon completion of design and agreement on price,” Mr. Patterson wrote, “MDFR will issue a purchase order to reserve a 2022 build slot with delivery expected in fiscal 2023.”

2 Responses to Electric fire truck from Austria may serve us for $1.3 million