Written by John Charles Robbins on May 11, 2021
Advertisement 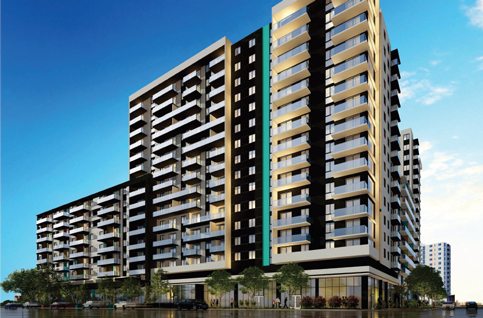 A developer is proposing twin towers of 15 stories, bringing apartments, office space and retail to a prominent corner in Miami’s Edgewater district.

The development, URBAN22, also includes an eight-story building in back and a parking pedestal for 529 vehicles.

The Melo company is responsible for several mixed-use residential towers in the Miami area.

The plan for URBAN22 was reviewed by the city’s Urban Development Review Board, which recommended approval with one condition: glass on balcony railings.

Total floor area in the development is 708,119 square feet, and open space is calculated at 12,619 square feet.

Along with spaces for motor vehicles the development will have 40 parking spaces for bicycles, according to the site plan.

The site is on the Northwest corner of Northeast Second Avenue and 22nd Street, a block from Biscayne Boulevard.

Attorneys Iris Escarra and Carlos Diaz, representing the developer, wrote a letter about the project noting the site is at the intersection of the Omni/Arts & Entertainment District, Edgewater, Wynwood, and Midtown neighborhoods, “areas of the City of Miami which have recently experienced rapid population growth and business expansion.”

They said the site is well served by public transit as it is within a Transit Corridor and provides convenient access to the Miami Trolley and various bus routes.

“The Project has been designed to activate this portion of Northeast Second Avenue and enhance the pedestrian experience in the area.

“The Project’s design along the ground floor responds primarily to human scale and pedestrian interests. The Project provides inviting public sidewalks with landscaping, hardscaping, and other improvements. The proposed pedestrian amenities promote pedestrian interaction and provide a connection to the surrounding area,” the letter states.

Parking is masked with habitable liners along all frontages, which minimizes the visual impact a parking garage would have on the pedestrian realm and the urban landscape, they said.

The developer is requesting waivers for the project:

■Permit up to a 10% reduction in the minimum frontage setback above the eighth story from 20 feet to 18 along the secondary frontages (Northeast 22nd and 23rd streets).

■Permit up to a 10% reduction in the minimum frontage setback from 10 feet to 9 along the primary frontage (Northeast Second Avenue).

■Permit up to a 10% increase in maximum lot coverage.

■Permit up to a 30% reduction in the required number of parking spaces where the property is within the half-mile radius of a Transit Corridor.

Arturo Griego, project architect, told the board to expect that the development will be built at “a quick pace” – in the next 12 months – like other fast-rising Melo projects.

Board member Robert Behar said he likes the project but sees the buildings “all in a straight line.” He suggested setting back part of the building.

“Set it back a little, it would give you a much more powerful image,” he said.

Board member Anthony Tzamtzis said, “I’m pleased with what I’ve seen so far.”

Board member Ligia Ines Labrada congratulated the developer’s team on finding a solution to breaking down this big mass of a project.

Mr. Behar referred to some previous criticism board members had of other Melo projects and made a point to tell Ms. Escarra to deliver the message: “We are not against them. This is a good example of a project we like to see.”