Advertisement
The Newspaper for the Future of Miami
Connect with us:
Front Page » Business & Finance » Coral Gables central business district healthy, adding on 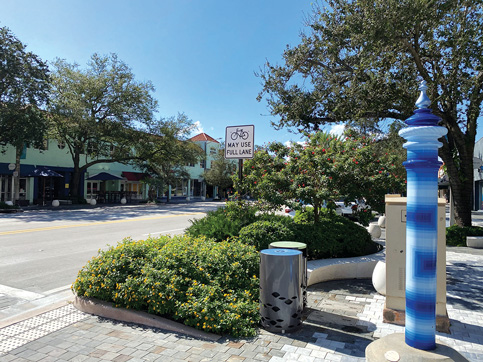 Though last year was a tough one for the restaurant, retail and entertainment industries, occupancy is high in Downtown Coral Gables and the city, along with organizations like the Business Improvement District of Coral Gables, are focused on activation and 21st century marketing strategies.

“We have seen our retailers and restaurants pivot their businesses in new directions to help sustain and to thrive,” said city spokesperson Martha Pantin via email. Occupancy in the Central Business District is 88.7%, she said, and citywide 29 new restaurants and retailers have opened this year, with 11 more expected to open soon.

There were still closures such as restaurant Ortanique on the Mile, noted the city’s Chamber of Commerce via email, but there has also been the arrival of new brands like Gramercy, Luca Osteria and Gustave.

Over 70 restaurants, Ms. Pantin said, acquired permits from the city for outdoor dining, which has been a great help to restaurants during the pandemic.

Together with the city and chamber, said Business Improvement District Executive Director Aura Reinhardt, the district is working on marketing and activation.

The goal, she said, is to bring in locals and visitors from other places and make sure people feel comfortable coming out to areas like Miracle Mile. Examples of activations, she said, include hiring jazz musicians or contortionists to perform during lunch hour outside local businesses. Some activations have even taken place in the storefronts of local merchants, like a nutrition class that was held this month at Giardino Gourmet Salads.

The city and improvement district are working together, Ms. Pantin said, to install four murals along Miracle Mile this June.

“Happy, postcard-like settings that evoke the feeling of living in Coral Gables and are filled with the flora and fauna of our community,” she said, “provide the perfect backdrops for social media for people to enjoy while they shop and dine in the downtown.”

Merchants and the district, Ms. Reinhardt said, are increasingly focusing on relatively new marketing strategies including utilizing social media. While before they may have had a loyal customer base and not focused as much on marketing, she said, now they are tasked with bringing customers back – and generating new ones.

“Retail veterans like Violetas on Miracle Mile increased their focus on personalized, concierge service, working one on one with customers over text and WhatsApp and arranging private appointments while also focusing on increasing online sales,” Ms. Pantin said. “The key to many of their successes is using new platforms and opportunities to reach customers. New retailer Aria Rose, for instance, sells via Instagram and promotes on social media to capitalize on her young audience.”

“Additionally,” she said, “the city is giving out licenses for an online selling platform, CommentSold, which allows businesses to optimize their social media for sales purposes. This opportunity is available to businesses who fill out the application and is first come, first served.”

The Business Improvement District, Ms. Reinhardt said, is also utilizing social media and working with influencers from outside of the Gables to bring in new guests. Influencers, who are usually individuals with a large following on social media in a given “niche” such as lifestyle, food, or fitness, may receive a tour of downtown or attend an event like a wine tasting and later post about it for their followers.

A pop-up program that started last October to match local artists with empty storefronts to use as their studios had some lasting results, Ms. Reinhardt said. The three-month program ended in December, and during its run allowed artists to work while onlookers watched through the windows or even participated. Three artists from the program, she said, have continued to work with landlords to maintain their space in the district.