Advertisement
The Newspaper for the Future of Miami
Connect with us:
Front Page » Top Stories » Environmental initiative seeks to add native oysters 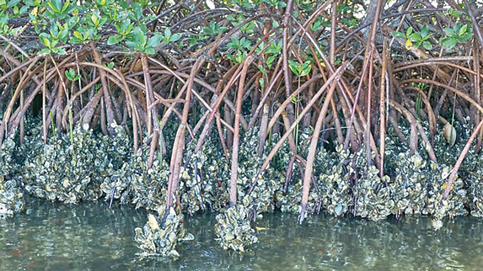 An environmental initiative to increase native oyster numbers and have cleaner waterways throughout Miami-Dade is pushing forward and in need of volunteers.

The goal of the project is to establish healthy native oyster populations at select sites including Coral Gables and Deering Estates. Used oyster shells are being collected from local restaurants and hotels. These shells will be used to make oyster gardening lines to be placed under docks along with filled oyster cages, which will create a habitat for mature oysters to reproduce and baby oysters to attach, said Alberto Aran, who is leading the project’s efforts.

With the help of Michael’s Genuine Food and Drink in Miami and Coconut Grove’s Kush by Spillover, Mr. Aran said over 20,000 used shells have been collected so far. They take three months to cure and get rid of any foreign parasites and disease before they are placed at waterway sites.

“I want people to feel open to sign up and participate in different ways. I need volunteers to collect shells weekly or monthly from participating restaurants, build vertical oyster gardens, and the next thing is to create a citizen science monitoring program to help us figure out how many native oysters are out there right now,” he said. Those who want to volunteer can email him at watershedactionlab@gmail.com or sign up at watershedactionlab.com

Adding substrate such as oyster shells in bags or hanging from docks downstream will help the habitat restoration exponentially as the larval oysters will have a place to grow into adults, Mr. Aran said. These oysters will provide much-needed filtration to the waters entering the bay, he said.

In January, Mr. Aran got the support of the Coral Gables City Commission as he explained that there was less than 1% of native oysters living along South Florida’s coastlines and waterways, and the lack of habitat is stopping these oysters from thriving and really starting to help clean the waterways.

With 21 basins flowing into Biscayne Bay, native oysters will dissolve more nitrogen waste levels in the waterways and drop nutrient loads into seagrass regrowth, which has decreased over 85% since 2011, he told city commissioners.

The project timeline is based on the natural cycle of the oyster. “We also know that these oysters will adapt over time, and by having cages with oysters close together, we will see a higher success rate,” he said.

While out on the bay monitoring and looking for growing oysters, Mr. Aran said he spotted small pockets of baby oysters along the Deering Estates bay area.

“They were small but healthy, which is very promising,” he said. “It’s an indicator that things are good, especially during this time of year due to fresh rainwater streaming into the bay, which is a trigger mechanism helping them to reproduce.”