Advertisement
The Newspaper for the Future of Miami
Connect with us:
Front Page » Government » Successors to Miami-Dade Expressway Authority move to organize 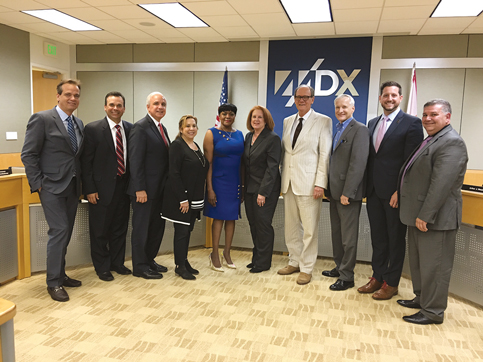 Just over a week after an appeals court shot down a Miami-Dade Expressway Authority lawsuit challenging its dissolution and replacement by the state, that new agency is set to hold its first meeting.

The Florida Department of Transportation will host a public meeting of the Greater Miami Expressway Authority (GMX) Friday in the auditorium of the department’s District Six headquarters.

GMX board members are to be introduced and sworn in. They’ll then be presented with a report by Javier Rodriguez, executive director of the Miami-Dade Expressway Authority, Florida Department of Transportation spokeswoman Tish Burgher told Miami Today.

An overview of the meeting’s agenda shows that Mr. Rodriguez is to update the board on the status of the organization, which has continued to operate the five tollways under its control. They are the Airport Expressway (112), Dolphin Expressway (836), Don Shula Expressway (874), Gratigny Parkway (924) and Snapper Creek Expressway (878).

Mr. Rodriguez is also to provide updates on the agency’s operations and Covid-19 impacts, upcoming procurements, immediate needs, details on the status of its finances and what key vacancies exist within the organization.

GMX board member and Florida Department of Transportation District Six Secretary Stacy Miller is also to provide an update on the local district.

None of the five appointments have been made, Ms. Burgher said.

If no appointments are made by Friday, it would leave the board without enough members for quorum under normal rules.

But according to an August Miami Herald report, Ms. Cancio told Miami-Dade Expressway Authority lawyer Carlos Zaldivar that if the county refuses to appoint members “then those vacancies would not affect quorum.”

The Herald reported April 1 that the old toll agency’s lawyer, Gene Stearns, intended to file an appeal with the Florida Supreme Court and was urging the county to file another lawsuit to stave off the permanent dissolution.