Advertisement
The Newspaper for the Future of Miami
Connect with us:
Front Page » Transportation » Miami-Dade seeks federal funding for Northeast commuter rail line 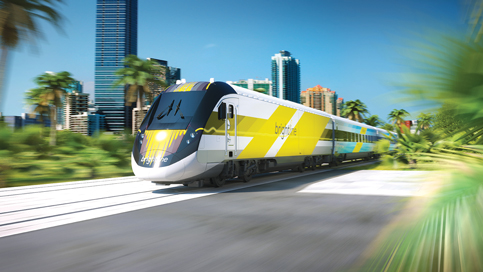 Background work for a planned commuter rail linking Miami to Aventura is underway, as Miami-Dade applied last month for federal funding for the project and is in talks with operator Brightline to run the route.

If all goes according to schedule, construction of what is known as the Northeast Corridor will be done in 2024, according to Luis Espinoza, spokesman for the county Department of Transportation and Public Works (DTPW).

“The county is discussing the steps necessary to implement the Northeast Corridor commuter rail service with Brightline,” he said. “Conversations are ongoing.”

Miami-Dade commissioners in November unanimously approved a resolution by Sally Heyman, whose district includes Aventura, directing the county administration to complete negotiations with Brightline for the Northeast Corridor service.

Last month, DTPW staff submitted an “Infrastructure for Rebuilding America” grant application with the US Department of Transportation for the corridor, one of six commuting routes prioritized in the Miami-Dade Smart Plan.

Also last month, Miami-Dade’s transportation planning board – comprised of all 13 county commissioners, eight elected municipal officials and four state appointees, including one school board member – selected passenger rail as the preferred transit mode for the corridor.

The corridor is to run on Florida East Coast Railway tracks between Brightline’s MiamiCentral Station and the future Aventura Station, for which Miami-Dade commissioners in 2019 agreed to pay Brightline $76 million to build.

It will cost about $375 million to build the rail infrastructure, stations, park-and-ride facilities, maintenance depots and trains necessary to run the 13.5-mile route, which will cost about $16 million per year to operate and maintain, according to Aileen Bouclé, executive director of the Miami-Dade Transportation Planning Organization.

Miami-Dade hopes federal funds will cover half of the construction cost. To qualify for federal dollars, the county must cooperate with an environmental evaluation of the project.

The county expects the Florida Department of Transportation to cover a quarter of the costs, with the remainder coming from funds backed by a local half-percent sales tax known as the half-penny.

Half-penny funds also will cover the cost of the three-acre Aventura Station, setting the county’s estimated contribution toward the project’s total construction at $162.25 million.

Brightline in December told investors that it might create a subsidiary to operate the Northeast Corridor and rename the service to differentiate it from the main company brand.