Advertisement
The Newspaper for the Future of Miami
Connect with us:
Front Page » Transportation » After $345 million buildout, Brightline to run new intercity rail 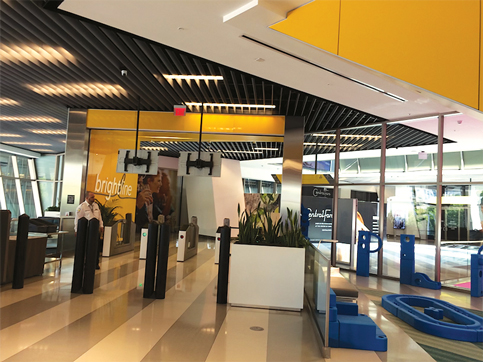 As heralded by a 2019 decision by Miami-Dade commissioners to pay $76 million for a Brightline station near Aventura Mall, county transportation decision-makers last week endorsed the for-profit inter-city rail company’s trains as the preferred mode for a Miami-to-Aventura commuter rail corridor.

It will cost an estimated $345 million to build the necessary rail infrastructure, stations, park-and-ride facilities, maintenance depots and trains, according to a Feb. 18 memo from Aileen Bouclé, director of the Miami-Dade Transportation Planning Organization.

Once built, operations and maintenance are expected to cost $16 million a year.

Miami-Dade will ask for half the construction cost from the Federal Transit Administration’s capital investment grant program. To qualify, the county must cooperate with an environmental evaluation of the project.

The plan, Ms. Bouclé wrote, also includes an expectation that the Florida Department of Transportation will contribute a quarter of the project cost. Miami-Dade intends to cover the remainder using funds generated by a local half-percent sales tax known as the half-penny, which county voters approved in 2002 to improve and expand transportation.

Half-penny funds will also cover the cost of the three-acre Aventura station, setting the county’s estimated contribution toward the project’s total construction at $162.25 million.

“In addition, there is a proposed ‘Access Fee’ for commuter rail to operate on the [Florida East Coast Railway] line,” Ms. Bouclé memo said.

The 13.5-mile route, which is to begin at Brightline’s southernmost station, MiamiCentral in downtown, is called the Northeast Corridor. It’s one of six commuting corridors prioritized for rapid transit upgrades in a 2016 initiative called the Strategic Miami Area Rapid Transit (Smart) Plan.

Miami-Dade, Broward and Palm Beach counties had sought a deal in 2013 with Florida East Coast Industries to create a coastal link between the areas for Tri-Rail on tracks the company owned.

They three counties sent a letter to the Federal Transit Administration to begin development of the project.

In November, Miami-Dade commissioners approved a resolution directing Mayor Daniella Levine Cava’s administration to begin negotiations with Brightline for the route, a move county Commissioner Sally Heyman, whose district much of the corridor goes through, called “the last piece of the puzzle in establishing the foundation necessary” for a future agreement between the company and county.

Brightline had proposed the route for the Northeast Corridor in early October 2019.

The Aventura station will sit halfway between Brightline’s Miami and Fort Lauderdale stations.

In a December memo to investors, Brightline said it may brand the service differently and could create a subsidiary operator to run it. The company showed plans for five stations between MiamiCentral and Aventura, including Wynwood, Design District, El Portal, North Miami and FIU Biscayne Bay Campus, which abuts Solé Mia, a $4 billion, 184-acre development with nearly 400 rental units, commercial retail and a seven-acre artificial lagoon.