Advertisement
The Newspaper for the Future of Miami
Connect with us:
Front Page » Communities » Miami Beach envisioned after sea level rise 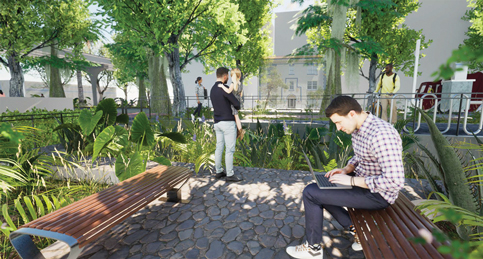 With two to three feet of sea level rise predicted in the next 50 years, what will Miami Beach look like in 2070? This is the question graduate architecture students at Florida International University attempted to answer in a joint effort with the city to re-imagine how historic buildings may be preserved in the future.

Last March, the city unanimously approved a resolution directing administration to develop an “inspirational campaign” highlighting city resilience efforts and projections of what the city could look like in 30 or more years. Miami Beach, Interim City Manager Raul Aguila said in a memo, has completed or commissioned multiple studies along these lines including the “Buoyant City” guidelines for historic district preservation endorsed by the commission last November and the Jacobs Engineering Blue Green Infrastructure Plan, Road Elevation Strategy and Neighborhood Prioritization Project endorsed by the commission last July.

In the most recent effort, 17 FIU students led by Professor John Stuart looked at these studies, sea level rise projections, and existing properties in the Flamingo Park Historic District between Meridian Avenue, Lincoln Road and Espanola way to determine what they could look like 50 years from now.

During the fall 2020 semester, Mr. Stuart said, students chose the buildings they wanted to work on and spoke with scientists, property owners and city officials to gain insight about the land and its potential. The goal, he said, was to “build a future based on the past,” sensitive to the culture of Miami Beach.

The results, he said, were a variety of ideas including raised transportation, conservation centers and futuristic uses of technology, such as holographic-looking “overlays” or screens that could educate visitors on the history of an area.

“There’s no doubt,” Chief Resilience Officer Amy Knowles told the Land Use and Sustainability Committee, “that there is tremendous importance for inspirational images of what the city is going to look like in the next 30 to 50 years, given two to three feet of sea level rise, and the innovations we will see.”

The question, she asked commissioners, is what comes next for the project. The city, she said, should continue to work with FIU for this course and potential related projects. Future steps, she continued, could include a virtual community engagement meeting showing off the body of work and examining related studies, a multi-day collaborative meeting engaging local and international experts, or a competition for professionals to engage in a similar project.

Commissioners backed the idea of a public workshop, asking the city administration to create messaging around the event. Mr. Stuart said he offered the course each fall, and could focus next semester’s on a different area,

“We should hold this workshop,” said Commissioner Mark Samuelian. “where we bring the various visions that we have. We’re not looking for one crystal vision, we’re looking for a process. We’re looking for a positive message (and to) highlight a partnership that we value.”