Advertisement
The Newspaper for the Future of Miami
Connect with us:
Front Page » Top Stories » With cruises halted, PortMiami keeps it head above water

With cruises halted, PortMiami keeps it head above water 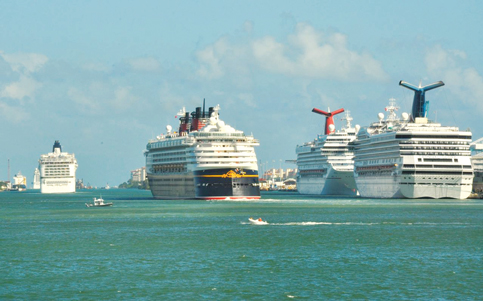 As the pandemic rages on, passenger ships remain harbored at PortMiami. Cruise companies have canceled sailing plans through at least the first third of 2021.

But according to Managing Port Director Andy Hecker, internal savings, strong cargo traffic and favorable financing will allow PortMiami to continue operations and cover costs, including debt service on bonds, without tapping its savings through the end of the fiscal year.

“The department’s new deadline is between September and October 2021,” he told Miami Today by email.

That’s five to six months past when former deputy mayor Jack Osterholt first projected the port would run into financial troubles. Despite hundreds of millions of dollars lost from a sea tourism industry in limbo, PortMiami has subsisted without dipping into its $114 million reserves by cutting non-essential spending and downscaling several massive terminal projects, among other measures.

Mr. Hecker said PortMiami’s “robust financial modeling tool” now shows the port having a little more financial leeway due to several factors, some spurred by the pandemic itself.

“Cargo volumes have set records each month,” he said. “The department’s debt service on its variable rate has experienced interest rate costs under 1%. Personnel working remotely have reduced overhead costs including utilities and supplies.”

This month, Mayor Daniella Levine Cava said she had extended waivers of lay berth and harbor fees for the county’s cruise partners through March 31. Her predecessor, Carlos Giménez, set the policy last March.

The waived fees, which include passenger guarantees and other regular payments that cruise companies with berthing or operating agreements here normally must pay, amount to a $7 million per month shortfall for the county.

Commissioners approved the waivers without comment Oct. 20, 2020. A worst-case scenario in which passenger ships remain docked for two-plus years would see the port lose $285.5 million in previously guaranteed revenue.

In exchange for the bailout, Miami-Dade asked only that cruise lines still guarantee vessel calls at PortMiami, maintain passenger volumes here relative to other US ports and possibly meet other requirements “on a cruise line by cruise line basis,” Mr. Osterholt wrote.

Ms. Levine Cava said in statement Feb. 3 that Miami-Dade will “continue to support our cruise line partners through these unprecedented times,” adding that she knew “the industry will recover stronger than ever as we rebound and build back our economy in the months ahead.”

Carnival Cruise Line, Royal Caribbean, Norwegian, Celebrity Cruises and Disney Cruise Line have all announced that they will not sail until at least April 30.

MSC Cruises, which in 2019 inked a 62-year, multibillion-dollar deal with the county, including plans for a $300 million “mega terminal” that will also serve Disney ships, canceled cruises through April 30 or later.

Virgin Voyages said it wouldn’t sail until May. The virgin voyage of its first ship, the Scarlet Lady, was originally set for April 1, 2020.