Advertisement
The Newspaper for the Future of Miami
Connect with us:
Front Page » Business & Finance » Polish American Club shores up riverfront development 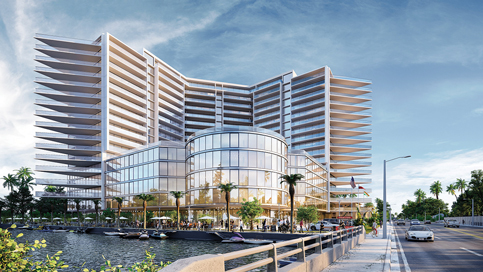 Since the pandemic interrupted the Polish American Club of Miami’s plans to build a major mixed-use development near the Dolphin Expressway, club officials have used the time to do more due diligence and form stronger relationships with its neighbors.

The club proposes to replace its outmoded headquarters, built in 1941 and recently demolished, with a massive modern structure spanning 681,102 square feet and rising 18 stories on land it owns at 1250 NW 22nd Ave. (Pulaski Avenue) on the South Fork of the Miami River.

Although the site’s current zoning classification allows mixed-use development including multi-family residences, commercial and office uses, and community centers, the proposed scope of the project would require an upgrade. That is proving to be a major roadblock in rolling the project out.

“When I became president of the Polish American Club in December of 2019,” said Dr. Michel S. Pawlowski, “we got guidance on what is acceptable and what is not acceptable to rezone. We filed an application for rezoning in February 2020 that was accepted by the city’s Planning & Building board and set up meetings with city commissioners, but Covid-19 cancelled those meetings.”

The club is now accepting Letters of Intent to purchase future apartments and rent commercial office space, he said, and is also identifying costs and donors, “but we are holding back until we get rezoning.”

In the meantime, the club has turned its attention to establishing good relations with its neighbors.

In promotional materials, the new development is described as “a magnificent tribute, a monument to the Polish people,” that will house the headquarters of a number of Polish organizations, among them the American Institute of Polish Culture, the Chopin Foundation of the US and the Honorary Consulate of the Republic of Poland. Other possibilities are under discussion – including some amenities the property’s neighbors have requested, such as a mini-mart and co-working space.

The neighbors are predominantly Cuban Americans. For those who know their history, however, the merging of Polish and Cuban culture makes sense.

Dr. Pawlowski points out that Carlos Roloff y Mialofsky, a close friend of Jose Marti and a major general in Cuba’s struggle for independence who also served as his adopted country’s Secretary of War and Treasury, was born in Poland.

“Many past political leaders made the Polish American Club of Miami their after-hours home,” Dr. Pawlowski said, “such as US Attorney General Janet Reno, Sen. Claude Pepper, Sen. Lawton Chiles, congressmen, mayors, commissioners, etc. It was the place to be. It has a lot of history.”

The neighborhood is scheduled for an enhancement, including a riverwalk and the redevelopment by the nearby Police Benevolent Association of 16-acre Fern Isle Park. Renovations include an amphitheater where, Dr. Pawlowski said, the club will support free concerts and other entertainments. “A crossway will also be necessary,” he said. “We will partner with the city on that.

“We have asked a couple of people who watch out for vandalism and graffiti in the park to let us know so we can get it eliminated. We are all looking out for each other’s interests as we wait to crawl out of covid.”

Despite all the hurdles, Dr. Pawlowski is optimistic that the project can be completed in 2023.

Dr. Pawlowski said he plans to accept that invitation after consulting with his board of directors on Feb. 15: “I just want to make sure we are ready.”

One Response to Polish American Club shores up riverfront development