Advertisement
The Newspaper for the Future of Miami
Connect with us:
Front Page » Education » Major League Baseball Youth Academy for Miami strikes out again 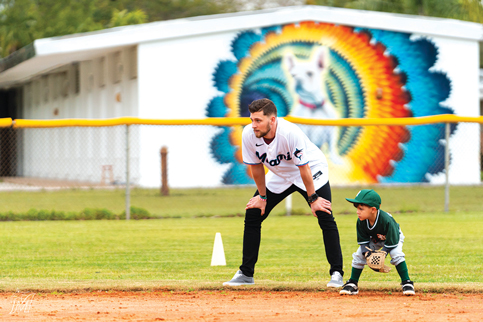 The arrival of Covid-19 shortly after the beginning of Spring Training last year further postponed the possibility of proceeding with a long-awaited permanent Major League Baseball Urban Youth Academy in South Florida.

The promise of a baseball academy as a path to success for underprivileged youth was part of the deal that in 2009 delivered public funding to the tune of nearly $3 billion for the construction of Marlins Park. But site procurement, changes in ownership and other issues have plagued the project from the start.

A location for an academy was chosen in Hialeah in 2007, and a January 2009 memorandum of understanding with Major League Baseball said an academy would rise with the league financing up to $3.2 million of its cost. It was to have, said baseball Commissioner Bud Selig, “state-of-the-art facilities including a show field complete with scoreboard; permanent seating for 700 fans with space for an additional 1,800 fans; dugouts and lights; two auxiliary fields; four softball/Little League ballfields and batting cages” plus office space and other facilities.

Major League Baseball opened the first of the academies in Compton, CA, in 2000. The academy in Miami-Dade was to be the second. But as matters lagged here, baseball officials opened an academy in Houston in 2010, in New Orleans in 2012, in both Washington, DC, and Cincinnati in 2014, in Philadelphia in 2015, in Kansas City and West Dallas in 2017, and Miami waited.

The current Miami Marlins’ ownership group, led by Derek Jeter, “understands the importance of keeping promises and has carried that priority across all facets since taking over the organization in October 2017,” said Jason Latimer, the team’s vice president of communications and outreach.

“That desire and concept has driven many of our decisions to fulfill this organization’s promises to our community as we continue to work with our local elected officials and leaders to provide for our local youth in the area of baseball and softball.

“Though no brick and mortar academy has been erected, our organization has applied the programming across our community in a variety of ways to grow the game of baseball and ensure that baseball and softball programming is available and accessible for all.”

In line with baseball organizations across the country, the Marlins turned their attention to virtual alternatives to growing and promoting the sport.

“The recent pandemic has shined a light on the importance of being able to reach individuals in their environment,” Mr. Latimer said, “while providing virtual options to ensure increased accessibility.”

During 2020, despite restrictions imposed by the pandemic, he said, the Marlins succeeded in launching the Marlins Fun at Bat Program, an entry-level bat and ball program for kids that emphasizes character development, functional movement and active play. About 90,000 students from Miami-Dade County Public Schools participated.

The Marlins and the school district also partnered in a student athlete mental wellness program.

The team’s tee ball initiative, launched in 2019, will return this year, Mr. Latimer said, with a current commitment to support more than 200 teams across youth leagues in Monroe, Miami-Dade, Broward and Palm Beach counties. Tee ball introduces children 4 to 6 to basic baseball skills, with the aim at growing the game and alleviating some of the costs for players and leagues.

“We also continue to grow our Marlins RBI and Junior RBI programs,” he said. The acronym stands for Reviving Baseball in the Inner City. The programs reached more than 850 youth in Miami-Dade and Broward counties in 2019.

Meanwhile, the Marlins organization joined efforts across the sport to step up to the plate with ramped up community service.

“Shortly after Spring Training was paused, the Marlins jumped into action,” Mr. Latimer said, “initiating relief efforts within two weeks. An assessment of our community needs allowed us to focus on making an impact in the following areas: food security, educational support, Covid-19 testing and PPE, and financial support and resources.

“Our focus on providing support for our area youth,” he said, “has also allowed us to allocate additional resources for what has continued to develop as a real need for our neighboring communities.”

The organization provides weekly food distributions in Liberty City and Little Havana and has installed a food pantry at Charles Drew K-8 in Brownsville. A second pantry will soon open at Citrus Grove Elementary in Palm City.

Though a visible academy does not yet exist, Mr. Latimer said, “the Marlins have made significant strides to fulfill their promise to the community with the services of youth baseball and softball programming. As we have adjusted our path, we have been able to significantly impact quite a large number of youth in the South Florida area, and we will continue to grow and invest in these efforts.”