Advertisement
The Newspaper for the Future of Miami
Connect with us:
Front Page » Top Stories » Pepe Diaz shuffles the deck on county committees 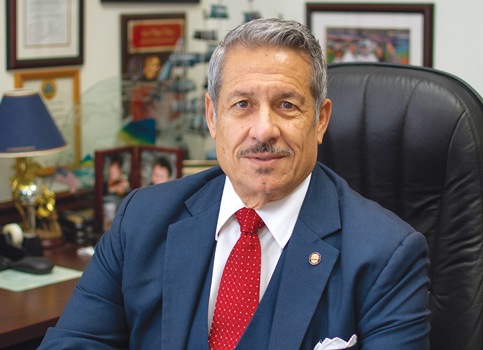 When Miami Today asked Miami-Dade County Commission Chairman Jose “Pepe” Diaz in December whether he planned to shake up the commission’s committees, his answer was unequivocal: “Oh yes.”

Now the list of new committees is out. Aside from having new names, most boast new leaders and some combine previously separated priorities.

The most powerful among the committees, of course, is the Chairman’s Council of Policy, which replaces former chairwoman Audrey Edmonson’s Chairwoman’s Policy Council. The name is different, but the function is largely the same.

Mr. Diaz’s leadership of the council is the only non-full-board role he will serve. Conversely, Vice Chairman Oliver Gilbert III will serve on every committee and retain his role as chairman of the Miami-Dade Transportation Planning Organization Governing Board, which contains all 13 county commissioners as well as municipal and school board officials.

Aside from Mr. Diaz and Mr. Gilbert, who succeeds Barbara Jordan on the commission representing District 1, the policy council will be comprised of the chairpersons of each new committee: Keon Hardemon, Sally Heyman, Eileen Higgins, Kionne McGhee, Jean Monestime, Raquel Regalado, Rebeca Sosa and Javier Souto.

Alphabetically, the first new committee is the Airports and Economic Development Committee, led by Mr. Hardemon, who succeeds Ms. Edmonson representing District 3. As its name suggests, the committee will focus on Miami International Airport, the county’s five general aviation airports and a multitude of economic development organizations, from community redevelopment agencies and chambers of commerce to the Greater Miami Convention & Visitors Bureau and “various groups tasked with bringing major sporting events to South Florida,” a memo from Mr. Diaz, who represents District 12, said.

The committee will consider some of the issues previously covered by the Tourism and Ports Committee and the Housing, Social Services and Economic Development Committee. Ms. Cohen Higgins, who commissioners appointed to succeed Mayor Daniella Levine Cava representing District 8 rather than hold a special election, will serve as the committee’s vice chairwoman.

The committee vice chairman, Jose Martinez, who represents District 11, is the immediate past chairman of the committee the new one most replaces, the Public Safety and Rehabilitation Committee.

The committee’s broad focus will be on “promoting efficient and effective delivery of the core services of Miami-Dade County government,” Mr. Diaz’s memo said, listing as specific goals of the committee “improvement to the procurement process for the County, accelerated conversion of properties from septic tanks to regional sewer service, and revamping the permitting process to utilize technology to make the service more efficient.”

Mr. Diaz emphasized the importance of improving county operating efficiency when he spoke with Miami Today last year, saying: “We need to have a more efficient and reliable government, and we need to find ways to compete not only on a national scale but worldwide.”

Other members of the committee include Mr. Gilbert, Ms. Higgins, Mr. Monestime and Ms. Sosa.

The committee will be quite busy in coming months, Mr. Diaz predicted, as its primary focus will initially be “addressing, mitigating and recovering from the Covid-19 pandemic.”

While much importance is placed on health issues, the added responsibilities of emergency management, including responding to natural and manmade disasters, is a newly expressed priority for a committee, past committee records show.

On intergovernmental affairs, the committee is to work with the Miami-Dade League of Cities, FEMA and both the Florida and national associations of counties.

Rebeca Sosa, who represents District 6, will again helm the board’s port committee, this time bound to sustainability efforts as the PortMiami and Environmental Resilience Committee. Mr. Souto, who represent District 10, will serve as vice chairman.

The committee will have a lot on its plate this year as a suffering cruise industry struggles to recover from the pandemic, a massive bailout of the county’s cruise partners continues and the effects of sea level rise and other climate impacts worsen.

“We are the cruise capital of the world, and we can’t lose our market share,” Mr. Diaz said late last year. “We need to be resilient, find new ways to make sure we build our economy stronger and faster.”

In addition to rebuilding the county’s cruise and cargo business, his memo said that the committee “will tackle issues such as beach renourishment, implementation of the recommendations of the Back Bay Study, monitoring the health of Biscayne Bay [and collaborating] with the Office of Resilience to develop and support policies to improve the environmental resilience of the region.”

Heading the new Public Housing and Community Services Committee, which retains some of the focus of the old Housing, Social Services and Economic Development Committee, is Mr. Monestime, who represents District 2.

“A community is measured by how it treats its most vulnerable members. [This committee] will have the continued task of promoting the development of workforce and affordable housing, clean and safe public housing, and the provision of services to children the disabled and the elderly,” Mr. Diaz’s memo said, noting that the committee will also work with the county Community Relations Board and other community advisory boards “to address issues critical to segments of our community.”

Ms. Higgins, who represents District 5, will serve as vice chairwoman.

As before, the committee will “maintain the critical role of supporting the acquisition, development and programming of green spaces, libraries and cultural programs and facilities,” Mr. Diaz’s memo said.

Lastly, Ms. Higgins will lead the Transportation, Mobility and Planning Committee, which will replace the prior Transportation and Finance Committee but keep many of its priorities.

Ms. Higgins’ district contains the Beach Corridor of the county Smart Plan, for which commissioners last year agreed to pay $8 million for designs to a group proposing a monorail on the four-mile route between downtown Miami and Miami Beach.

To date, all but one of six Smart corridors are still pending state and federal funding. The one corridor that is fully funded, the 20-mile South Corridor between Kendall and Florida City, is being challenged by Mr. McGhee, the committee vice chairman, who seeks to undo the $368 million bus rapid transit upgrade in favor of reconsidering a Metrorail extension on the route.

“The people of South Dade have called for rail,” Mr. McGhee wrote on Twitter Jan. 13. “We, as elected officials, are employed by the people and not the other way around. We should never forget this!”

Ms. Higgins has repeatedly said she opposes such a move and has pointed out that the bus upgrade is designed for future conversion to rail once ridership reaches levels that would attract more federal dollars.

“I lived in Mexico City, where there is bus rapid transit, which is essentially an above-ground subway, and it’s fantastic,” she told Miami Today last week. “We have secured $200 million for that project, $100 million from the federal government, $100 million from the state, [and] we do not need to be [reconsidering] plans for rapid bus now; we need to be building the South Dade rapid transit corridor and focus on the excitement of that, not going off on tangents.”

Mr. Diaz similarly expressed a desire to move ahead after years of seemingly endless studies and reconsiderations.

“It’s time to start moving dirt and getting things in place, finding the money we need and prioritizing the best bang for the money,” he said in December.

His memo this month elaborated on the broader focus of the committee: advancing the Smart Plan, developing areas surrounding transit hubs into high-density areas, planning for future development and activities in the region and overseeing the budget, strategic planning and performance analysis of the county Office of Management and Budget.