Advertisement
The Newspaper for the Future of Miami
Connect with us:
Front Page » Communities » Miami asks redevelopment agency to pay for Ferre Park 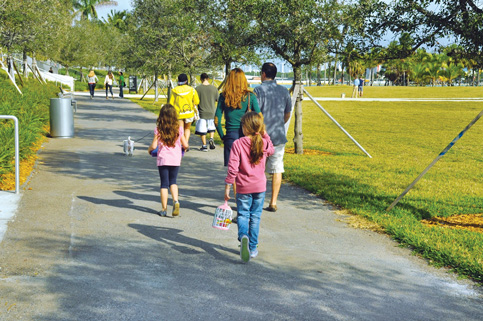 Miami city commissioners say it’s long past due for the Omni Community Redevelopment Agency (CRA) to pay to improve Maurice A. Ferre Park.

Currently, the Omni CRA owes about $6 million, including several $2 million payments, which prompted commissioners last week to unanimously urge the Omni CRA Board to pay money owed for work at the park.

The Omni CRA Board is composed of the five city commissioners themselves. But CRAs are funded mainly by incremental property taxes generated by developments within their boundaries. Their funds are separate from the city’s.

Formerly called Museum Park, the 21-acre site on Biscayne Boulevard in downtown Miami was re-named in February 2019 to honor Mr. Ferre, who served as a state legislator, 12-plus-year mayor of the city, on the Miami-Dade County Commission and more. The waterfront park stretches from the Pérez Art Museum Miami to AmericanAirlines Arena.

The Omni CRA joined an agreement with the City of Miami, the Southeast Overtown/Parkwest Community Redevelopment Agency and Miami-Dade County on Dec. 31, 2007, that included making annual contributions to the city, paid to the Bayfront Park Trust, for capital improvements at the park.

Since the 2007 agreement, according to legislation commissioners considered last week, the Omni CRA has not complied with its provision for several years.

In 1987, the city formed the Omni CRA to revitalize areas stretching north from I-395 to Northeast 20th Terrace, bordered by Biscayne Bay to the east and Northwest Second Avenue to the west. Its six neighborhoods include Omni, Northeast Overtown, South Wynwood, South Edgewater, and small slices of Park West and Watson Island.

According to its redevelopment plan, the Omni CRA supports historic preservation, business opportunities, housing affordability, infrastructure and quality of life.