Advertisement
The Newspaper for the Future of Miami
Connect with us:
Front Page » Profile » Philippe Houdard: Recruits businesses to Miami, heads Pipeline Workspaces 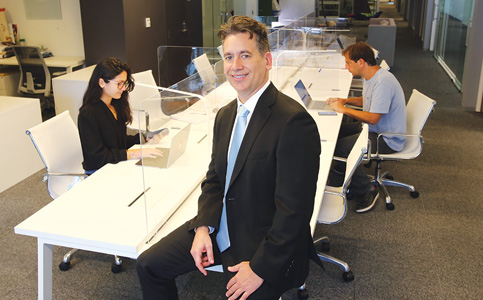 Growing up on a farm in France taught Philippe Houdard the values of hard work and community, concepts he went on to build multiple successful enterprises around as an entrepreneur in the US.

When Mr. Houdard was a child, his father played for him records of former President John F. Kennedy’s greatest speeches. Mr. Houdard went on to work as a legislative aide to Joe Kennedy and campaign staffer for Ted Kennedy before earning his master’s in public policy from Harvard. After gaining experience in business and marketing working with mid-sized and Fortune 500 companies including Lucent Technologies, he founded SkyBank Financial and boutique shared-workspace firm Pipeline.

With six locations in Florida and one in Philadelphia to oversee, Mr. Houdard is kept busy as Pipeline’s CEO. But he still dedicates time to the community as a chair of both the Downtown Development Authority’s Enterprise Committee and the nonprofit Developing Minds Foundation, which he founded in 2006 to serve children affected by conflict and poverty.

“I always try to focus on something that resonates with me personally,” he said of his many roles. “I try to focus on areas that are important from a human standpoint. Pipeline is all about trying to help companies be successful. Developing Minds is focused on trying to help people emerge from difficult circumstances, and the DDA is focused on creating a platform for people to pursue their dreams by building a healthy economy here in downtown Miami.”