Advertisement
The Newspaper for the Future of Miami
Connect with us:
Front Page » Healthcare » County clears Jackson Health workers for hazard pay 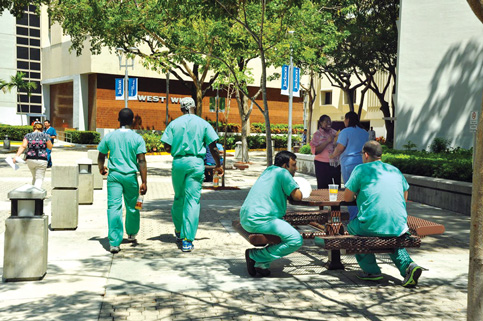 Employees at Jackson Health System who worked near patients confirmed or suspected of having Covid-19 are again cleared to receive hazard pay.

Once the agreements are finalized with two bargaining groups – the local chapter of the American Federation of State, County and Municipal Employees and the Committee of Interns and Residents – about 5,200 Jackson employees and 1,100 interns and medical residents will get a 1% boost to their base pay.

The total amount to be paid to employees in each group, union and non-union, “will not exceed $3 million,” according to Dec. 4 memo from William Heffernan, chairman of the Public Health Trust, the volunteer group that governs Jackson.

Commissioners directed the trust to negotiate for an additional, temporary hazard pay supplement in November, roughly a month after approving an initial 1% pay raise for hours worked between March 1 and June 30, the cost of which would “not exceed $8 million,” Mr. Heffernan wrote Aug. 31.

Mayor Levine Cava – who this month along with her husband recovered from a bout with the virus – said Dec. 7 that she and her staff, including new county Chief Medical Officer Peter Paige, were “very alarmed” at the rate the virus has spread here.

“We are now north of 240,000 cases in Miami-Dade County alone,” she said. “Our 14-day average positivity is at 8.5% and we are over 25% of all the new cases in the State of Florida. Positivity rate at Jackson is at about 10%, and we’ve seen a noticeable increase in hospitalizations – roughly up 35% in the last 14 days. So, this is a source of great concern. It’s going to potentially overwhelm our health system capacity.”

A surge in cases is likely after Christmas, said many medical professionals, including Dr. Anthony Fauci, director of the National Institute of Allergy and Infectious Diseases, who warned of “a surge upon a surge” on CNN’s State of the Union.

Signs of a surge were already evident prior to Dec. 25, according to Dr. David Woolsey, an emergency room doctor at Jackson, who told NBC 6 three days before, “We’re definitely seeing more [patients] than we were a few weeks ago.”

So far, that assertion tracks with figures on Florida’s Covid-19 Data and Surveillance Dashboard, which shows that new cases in Miami-Dade nearly doubled from 1,458 on Christmas Day to 2,810 Monday – the highest number of new positive cases in at least a month.