Advertisement
The Newspaper for the Future of Miami
Connect with us:
Front Page » Top Stories » Miami designates Catholic church in Overtown as historic 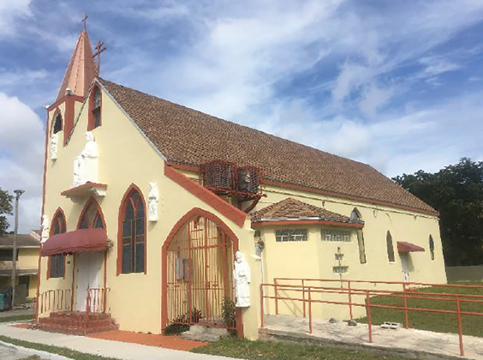 The City of Miami has designated St. Peter’s Antiochian Orthodox Catholic Church in Overtown as an historic resource.

The city’s historic preservation officer noted how the church was associated with a well-known priest and played a role in a move for racial equality in the city’s early days.

After reviewing details of the church, the Historic and Environmental Preservation Board voted unanimously to approve a final evaluation of the application and make the designation.

The applicant was the City of Miami, and the owner – St. Peter’s Cathedral Miami – is supportive of the application.

The church is at 1811 NW Fourth Court and sits among residential structures to the north, east, and west. Williams Park is to the south.

The historic name of the church is St. Peter’s African Orthodox Church, and it was constructed in 1936.

“The church is historically significant for its association with Ernest Leopold Petersen whose work reflects the beginning of racial equality in national and local history,” wrote Preservation Officer Warren Adams in his final designation report.

He said the church is also significant as an excellent example of a masonry vernacular religious structure designed for the African American Catholic community in the 1930s. It is particularly noteworthy for its incorporated Gothic architectural elements, stained glass, and interior decorative features.

The church was closed to the public in 2016 due to its poor condition; however, repair works have been undertaken within the past two years.

Mr. Adams said the church has been subjected to interior and exterior alterations that impact its original form, plan, space, structure, and style.

“Although the church’s aesthetics have been impacted, the vestibule, nave, sanctuary, and gallery spaces are evident, and the church’s historic function is still clear. The church retains some integrity of design,” he wrote.

Externally, the church retains original exterior materials such as concrete block and stucco walls and stained-glass windows, although some windows have been replaced with later designs.

Mr. Adams’ report notes that the loss of much of the mosaic and the painting in the sanctuary is “unfortunate” and the use of metal for the gallery railing is “inappropriate,” yet “the church retains much of its integrity of materials.”

One Response to Miami designates Catholic church in Overtown as historic