Advertisement
The Newspaper for the Future of Miami
Connect with us:
Front Page » Communities » Underline going over the top to celebrate its first leg

Underline going over the top to celebrate its first leg 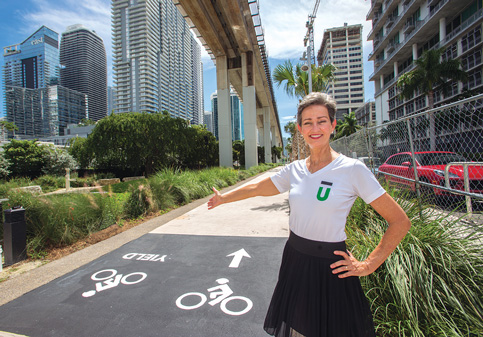 The Underline, a linear urban park stretching under the Metrorail tracks from the Miami River to Dadeland South Station, reaches a major milestone Oct. 19 with the a pre-opening celebration of the completion of Brickell Backyard, the project’s first, most challenging sector.

Due to safety concerns imposed by Covid-19, the celebration will be an invitation-only event, hosted by Miami-Dade County and bringing together people who have been involved in the project over its five years of development, said Meg Daly, president and CEO of Friends of the Underline, which oversees the undertaking via a public-private partnership with the county’s departments of Transportation & Public Works and Parks, Recreation & Open Spaces. A public opening is planned as soon as feasible, she said – perhaps in early November.

“Covid delays are not helping at all,” Ms. Daly said. “But I think our timing is good. People are valuing the outdoors now, and there’s renewed interest in walking and biking. Cities are built for cars, and that can be dangerous for cyclists. The Underline is being built to highest safety standards, and we hope people will get back to walking and biking.”

Running half a mile from the Miami River to Southwest 13th Street, Brickell Backyard is the shortest of the Underline’s three phases, but its high density and other factors make it the most difficult, said Irene Hegedus, chief of transportation enhancements for the county’s Department of Transportation & Public Works.

“The first half mile also integrates bus spaces and trolleys,” she said. “We did a study of sun exposure to maximize the amount of shade, which will make waiting time much more comfortable.”

The first block, from the river to Southwest Seventh, Ms. Hegedus said, will be more contemplative, with river views and an art gallery.

“The second block, between Seventh and Eighth streets, will be the most active in terms of sports,” she said, “with half a basketball court, a soccer court and exercise areas. We had to design to allow trucks to come into the area for maintenance of the Metrorail system, and also include self-sustaining wells for drainage.”

Across Eighth Street, Ms. Hegedus said, is a community area that will support such features as a movie screen, a stage for events, a long communal table and a number of square gaming tables for chess and checkers enthusiasts.

New signal lights at intersections along Southwest Seventh timed to work in tandem with existing ones on Southwest Eighth will boost safety for bicyclists, she said.

For planners, Ms. Hegedus said, Brickell Backyard is also serving as a lab for solving issues all along the Underline’s 10-mile corridor.

“We are trying everything,” she said, “and seeing how things perform. We’re trying to coordinate infrastructure with a heavy rail system while maintaining a park-like environment in an area that is densely populated.

“Then there are negotiations with the county and three different municipalities, which may have different departments working on it.

“And every funding source has its own restrictions, so from the get-go we set up a system to make sure everything is allocated correctly.”

One of biggest challenges, Ms. Daly said, is a stipulation attached to a $22 million grant from the US Department of Transportation that the whole project must be completed in five years – a condition that forced planners to restructure the construction schedule from nine phases to three.

Another was personal: Parker Thomson, founder of the Adrienne Arsht Center for the Performing Arts and Ms. Daly’s father and partner in the project in its early stages, died unexpectedly three years ago.

“It was heartbreaking for me not only because he was my father,” she said, “but also because he really helped me navigate the process. He had been through it before, and he had a cool vertical mind. Fortunately we have an incredible board of directors, and they jumped in and got me through a very difficult time.”

Supporters hope the Underline will enhance connectivity among the components of the transportation system.

“For me,” said Alice Bravo, director of the county’s Department of Transportation & Public Works, “this is the best thing that could ever happen to create greater awareness. The No. 1 thing in marketing public transportation is for people to know that it’s there and how to use it.

“The Underline is a wonderful way to make sure that the user’s experience is a pleasant one from one end of the corridor to the other. Friends of the Underline will be operating and maintaining the corridor, and we are making sure that we are delivering all the support they need.”