Advertisement
The Newspaper for the Future of Miami
Connect with us:
Front Page » Communities » North Beach Bandshell to host concert series without audiences 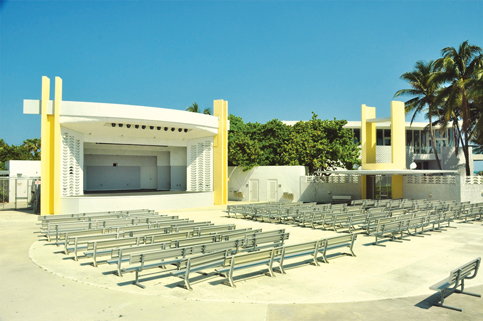 While live audiences have gone out of style due to the pandemic, a series of events will take the stage at Miami Beach’s North Beach Bandshell this fall in front of empty seats and virtual visitors.

At last week’s meeting of the Miami Beach Cultural Arts Council, representatives of the Rhythm Foundation, which manages the Bandshell, introduced upcoming acts that were quickly granted unanimous approval for rent fee waivers from the council

“We have a terrific season of virtual-only programs that are primed and ready for the public,” said James Quinlan of the Rhythm Foundation. “(Even) if we get to a place where we can allow the public in, we will continue with the livestream aspect.” Should this be possible later in the season, he said, mitigation plans will be put in place to ensure the safety of all guests.

In total, five events were presented to and granted rent waivers by the arts council: Miami Beach Salsa Festival, the Miami One Carnival, an extension of Free Gospel Sundays put on by the Adrianne Arsht Center, Dance Now, and Seraphic Fire.

Melina Almodovar, a representative from Miami Beach Salsa Festival, told the arts council that the Saturday, Oct. 3 event will feature music and salsa performers from all over the world. Last year, she said, the sold-out festival had to turn away roughly 3,000 guests after hitting capacity.

“What we try to do,” she said, “is bring the Hispanic community together in the culture and open it up to everybody so that everybody can enjoy salsa music and salsa culture.”

The next event, Miami One Carnival, will take place Oct. 8-11 and host a number of virtual events celebrating Caribbean culture.

According to representative Asa Sealy, the four-day event will kick off with a “Welcome to Miami” event celebrating all things Miami before launching into a series of shows featuring local and international DJ’s, youth performers and steel bands. As with the salsa festival, he said, Miami One Carnival will also take advantage of satellite performance to showcase some international performers.

Artists from about nine Islands will be performing, Mr. Sealy said, including Trinidad, Tobago, Haiti and the Bahamas.

“I think this is a very great opportunity,” he said, “for (the) communities involved here to come together and really showcase something rich in culture and heritage that weekend.”

Free Gospel Sundays, a series in its 13th season produced by the Adrienne Arsht Center for the Performing Arts, is also looking to hold its opening concerts at the Bandshell. According to a representative from the Arsht Center, local Pastor Marc Cooper, director of Miami Mass Choir, will be putting together a lineup for the series featuring local artists and special guests.

Next Dance Now!, which company director Hannah Baumgarten told the committee has performed on the Bandshell stage for 20 years, is hoping to return Dec. 13 with a new work inspired by real-life experiences brought about by Covid-19.

“We’re working intimately with our dancers to make a safe working environment,” she said. This experience will be reflected by the new work, which she said will be “an iteration of the moment that we’re living right now.”

“Seraphic Fire Christmas,” a representative said, “is a long-standing South Florida tradition. We’ve presented this production to communities all over South Florida for over a decade, including on Miami Beach.”

The Rhythm Foundation,  Mr. Quinlan told the council, will be sure to work with all performers to implement safe production protocols. Best practices from around the country, he said, are being evaluated and put in place for all aspects of performance from setting up “green rooms” to how crew and performers interact.

“That’s something we’ve studied and we really are continuously evolving and polishing,” he said.