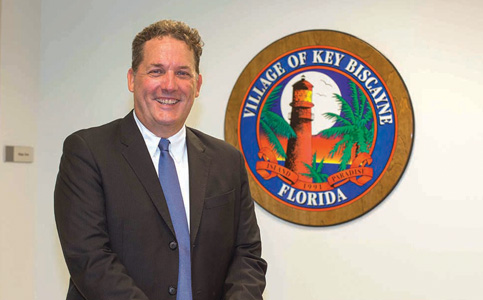 The next two years will be pivotal for the Key Biscayne, both in addressing issues that need fixing, from infrastructure and shoreline preservation projects to helping residents and businesses rebound from the pandemic.

Mayor Michael Davey knows how important his second and final two-year term will be, but if engagement from the community is any indication, the outlook for the island village is bright.

“We have to get moving. Now is the time to plan for the future,” he said. “And it’s exciting that we have a lot of people running for village council – eight or nine candidates. That’s a positive sign, that people are involved and engaged.”

An attorney by trade, Mr. Davey has served in public office in Key Biscayne since 2006, when he earned a seat on its council. Residents elected him as mayor in 2018. Two years later, he’s poised to cinch the office again unopposed.

Asked if he took it as validation that his constituency approved of the job he did so far, he’d like to think so.

“I’d like to think I’m in touch with what people are thinking on the island, that they agree with me at this point, and that I don’t take much for granted. You have to keep working and continuing to earn people’s trust,” he said. “Key Biscayne has always been a special place. The residents are really involved, and it truly has been self-government. We don’t have professional politicians.”