Advertisement
The Newspaper for the Future of Miami
Connect with us:
Front Page » Top Stories » Lincoln Road seeks to cut back renovation plans 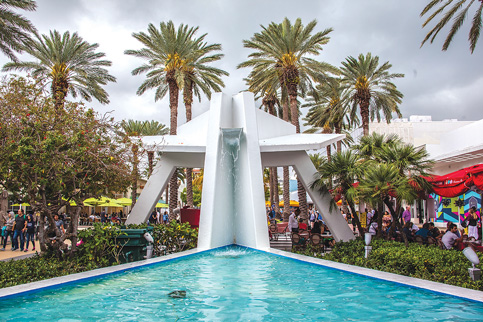 The Lincoln Road District Master Plan, which aims to revitalize the iconic Miami Beach shopping and entertainment street, may be redrafted to allow for less disruptive construction as local businesses recover from the economic impacts of the coronavirus.

Tim Schmand, executive director of the Lincoln Road Business Improvement District, told Miami Today that original plans included a mass removal and facelift of the street’s sidewalks, which was not only a costly matter but one likely to interfere with the accessibility of businesses. By taking this piece out and fine-tuning the plan, he said, the city could reduce costs while minimizing impact on the livelihoods of shop owners.

Last summer, Miami Today reported that city commissioners unanimously voted to spend $67 million to renovate Lincoln Road, while the Business Improvement District would be responsible for spending hundreds of thousands each year to bring cultural events and entertainment to the road. James Corner Field Operations, the team behind Miami’s Underline and New York’s Highline, was drafted in 2014 to design the renovation.

However, Mr. Schmand said, there is potentially $50 million to $60 million in the city coffers available for the project from Miami Beach’s Redevelopment Agency, which had earmarked these funds for the Lincoln Road District Master Plan. Last month, the improvement district unanimously voted to advise the city to enter into a new agreement with James Corner, which would involve redrawing the plan with a new budget and removing the sidewalk renovation portion.

The ultimate goal of the project, Mr. Schmand said, was to “refresh the road” and make pedestrian space, as well as the road’s unique architectural elements, more polished and accessible. Commissioners will consider the Improvement District’s request later this month, he said, when the city discusses its capital budget.

As plans would need to be redrawn, he continued, a projected finish date for the project is yet to be seen.

One important aspect of the plan for many stakeholders, Mr. Schmand said, is the removal and replacement of the “Jersey Barriers” blocking auto traffic on the road that were put up for safety reasons one Halloween and never removed. While Lincoln Road will remain closed to traffic, he said, designers will provide a more aesthetically pleasing alternative to the current barriers.

“Lincoln Road has everything you (could) want,” Mr. Schmand said, “(it’s) like an architectural history of South Florida.”

Morris Lapidus, who redesigned the whimsical road in the mid-1900s and closed it to traffic, Mr. Schmand said, believed that “too much is never enough.” The resulting entertainment street mixed culture with consumerism to booming success as its shopping season preceded that of the Northeast.

The master plan, he continued, will “refresh” Lincoln Road by improving plantings, cleaning up the areas around the Lapidus architectural “follies,” and adding more performance and seating space for cultural events.