Advertisement
The Newspaper for the Future of Miami
Connect with us:
Front Page » Healthcare » Health technology innovator tackles Covid-19 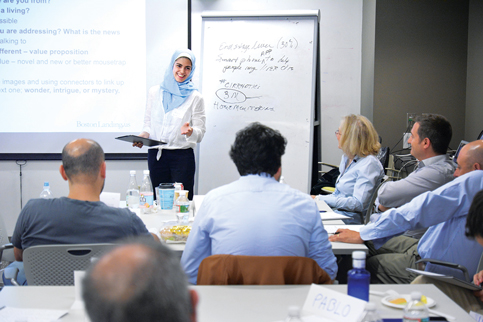 When MIT and Miami-Dade launched the Global Co-Creation Lab (GCL) late last year, neither expected that one of the health technology concentrator’s concerns in its first year would be a worldwide pandemic.

But rather than just doubling down on prior efforts, the nonprofit has broadened its focus and collaborations with local stakeholders like the Beacon Council and Jackson Health System to help the county – and world – deal with the virus.

“Thank God we have the Global Co-Creation Lab and our relationship with MIT, because the people that are working on this are phenomenal,” said Leland Salomon, deputy director of the county’s Regulatory and Economic Resources Department. “They’ve developed a tremendous amount of stuff.”

One Covid-19-specific solution, Thelial, now in development with the University of Miami’s Division of Infectious Diseases, has a conceptually simple application: using cells from nasal-swab tests and other similar cell analyses to determine how severe the virus’ symptoms will be for a person who has yet to contract it.

In theory, said Dr. Mercedes Balcells-Camps, program director at GCL, the test could give people an accurate measure of their individual risks and help communities to more safely reopen.

“You’re given a likelihood, an index and probability, of what the chances are of your severity of symptoms, and if there is a wave coming, how much of the population will be severely affected,” she said.

To bolster that initiative, GCL has partnered with Safe Paths, an MIT-led group that produces and provides open source tracking and tracing technology that can augment and enhance traditional virus-tracing methods.

GCL has also expanded Wellness Home, one of eight key affinity groups through which the lab is concentrating technology, healthcare and clinical delivery strategies.

Originally conceived with the goal of making smart homes medically responsive to their inhabitants’ healthcare needs over time – from floor sensors that can tell if a person has a blood circulation disorder to toilets that can test urine for kidney disease and diabetes – that idea, said GCL Executive Director Alejandro Roman, can easily be transferred to other similar settings.

“Hotels rooms and cruise liner cabins share a common denominator of problems,” he said. “We can expand those into a group, a potential consortium, around disease in these secluded spaces.”

Two other projects GCL is working on aim to harness the power and information from mobile devices.

The first, SounDx – a collaboration with MIT’s Institute for Medical Engineering and Science, Jackson and Miami International Airport – will, once it’s up and running, be able to detect Covid-19, asthma and sleep apnea symptoms by analyzing sound signatures with artificial intelligence.

The second project centers on a less-talked-about result of the virus: mental health.

According to report by Cigna-owned pharmacy benefit manager Express Scripts, antidepressant and anti-anxiety medication use has skyrocketed since Covid-19’s onset, with anti-anxiety prescriptions rising 34.1% from February to mid-March.

The report’s authors called the rise “understandable,” noting that “Americans have grown increasingly anxious as they’ve seen this global pandemic upend their lives within a very short time.”

GCL is now formalizing a partnership with Albizu University in Puerto Rico to develop a methodology and application for digital phenotyping, in which smartphones can use AI to detect early symptoms of mental disease onsets.

“We want to make it an aspiration, a desired state, to have mental wellbeing as part of our overall wellbeing,” Mr. Roman said. “Miami can elicit a lot of good data for working in a digital space of mental health, which needs more scientific evidence.”

Miami-Dade, he said, has a “huge deposit of raw healthcare data” whose refinement with AI could represent a massive opportunity for GCL, its investors and the county at large, which would enjoy a boom in machine learning engineering jobs and other related vocations.

“Miami could be the capital of AI and health in the world. We have the critical components to make that happen, and we think it has the right leadership to achieve it as well,” he said. “We hope that the healthcare community responds to really create in Miami a hub for artificial intelligence for health.”

GCL, which awaits its Florida 501(c)3 not-for-profit designation, set up in Miami-Dade last year with a $250,000 county investment after Mayor Carlos Giménez, Mr. Salomon and others from the county administration visited MIT. County lawmakers later approved a $1 million budget earmark to fund it through 2021.

“Miami has opened its arms,” Mr. Roman said. “We can be here for the next 20 years if the model works.”

The lab now has 28 projects underway that fall into eight separate affinity groups, each of which focuses on using technology to improve and reduce the cost of treating and preventing cardiovascular, brain, kidney and infectious diseases in the inpatient, outpatient, community and home care settings.

To better tackle so many developmental avenues, GCL has found 15 potential partners – with more to come – each with unique areas of expertise.

One such partner, Cipherome, which Mr. Roman called a “young company” that “has developed technology to work in pharmacogenomics,” is working with GCL to address a two-fold problem: health issues in pharmacology due to the unique drug susceptibilities in Hispanic and Black populations, and the concept of health equity in accessing and participating in clinical trials.

“Hispanic populations do not participate [enough in clinical drug trials], and the drugs don’t address their unique, idiosyncratic [needs],” he said. “We want to define the concepts of pharmacology in Miami [and] inform Big Pharma of these genetic variants and determinants that are common to the Hispanic and African American communities, [and] there is no better place than Miami to study that.”