Advertisement
The Newspaper for the Future of Miami
Connect with us:
Front Page » Arts & Culture » Miami-Dade Public Library System honored for innovations 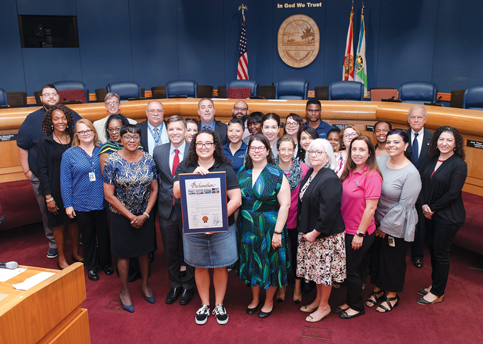 The Miami-Dade Public Library System in 2019 received two National Association of Counties Achievement Awards, which celebrate innovative programs that increase services to county residents. This feat earns it recognition as a winner for an organization in Miami Today’s Gold Medal Award Contest. The judges’ rankings in each category – Bronze, Silver or Gold – will be announced at an awards ceremony after the pandemic has passed.

Behind the Walls is a multifaceted outreach and networking program that ventures into the secure areas of prisons, correctional facilities, and jails to inform inmates of the services the library offers to fulfill their informational needs.

It’s estimated that at any time, 10,000 inmates are incarcerated in federal, state and county facilities throughout Miami-Dade County.

“This is an extension of the library’s place in the community,” says Program Manager David Hildenbrand. “Our mission is to be here for everybody.”

The program, offered to inmates about to be released, is voluntary, he says, “but it is drilled into them that the more they participate the less prone they will be to recidivate. And their families can use the services now and avoid the same mistakes they made.”

Mr. Hildenbrand says Behind the Walls also helps build a bridge back into the community through halfway houses, sober living facilities and nonprofit organizations that can help the recently released enter the workforce, achieve gainful employment and help lower the rate of recidivism. The program’s services include answering reference letters from inmates, participation in Community Relations Board meetings and working with prison staff on preparing inmates for a successful release back into the community.

The library system was also recognized by the National Association of Counties for an innovative program called STEAMFest, which stages classes, workshops and demonstrations with community partners in response to the federal Department of Education’s emphasis on STEM – an acronym for Science, Technology, Engineering and Math. The county’s library system has added an A for the arts, says Gina Menge, a library services specialist.

“I work with ambitious and talented librarians on problem solving,” she says – “figuring out how make things happen with the resources we have. We rely on community partners a lot when it comes to fundamental information kids in school need.”

At STEAMFests held in local branches where access to STEM enrichment outside the classroom is limited, she says, partnerships with local colleges, universities and hobby groups have helped to facilitate hands-on demonstrations of engineering concepts, robotics, virtual reality and environmental issues.

For example, FIU students provided real-world examples of 3D printing applications with a prosthetic arm, military applications for drone use and engineering structures such as bridges. Citizens for a Better South Florida had a demonstration table to show the effects of groundwater runoff and the chemicals that seep into the water system.

STEAMFest librarians have created a demonstration model that has been replicated for special in-library programs, school visits and community events such as STEAM Day at Marlins Park.