Advertisement
The Newspaper for the Future of Miami
Connect with us:
Front Page » Business & Finance » Wreckage of Airport City may yield Miami International Airport hotel 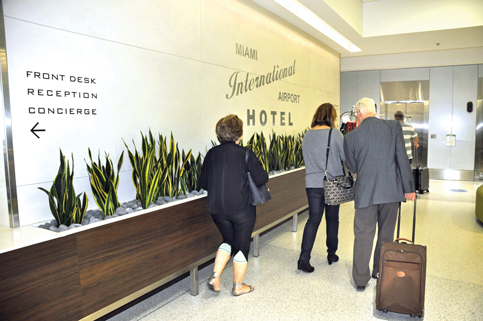 In 2016, negotiations with Miami-Dade soured amid issues over work an Odebrecht arm did in Cuba, project downsizing and assertions that the county could make more money without Odebrecht involved.

County lawmakers have since approved plans for a 15-year, $5 billion airport overhaul, including building at least one – but likely two – airport hotels, one built east of the Dolphin Garage across from the North Terminal, the other above the short-term parking deck central to all terminals.

Commissioner Esteban Bovo Jr. held a discussion Monday at Chairwoman Audrey Edmonson’s policy council about the hotel pieces, specifically whether hotel designs Odebrecht did for an airport site could be used now.

“Do we have to start from scratch all over? Can we pick up where we left off?” he asked.

Under state law, developments of airport facilities, including on-site hotels, do not require competitive solicitations, so using prior work is more a question of policy than legality, a county attorney told him.

Vice Chairwoman Rebeca Sosa, whose district contains the airport, scoffed at “going back to Airport City” and said the county should instead move forward with the new master plan commissioners approved last year.

“With all due respect, commissioner, I really encourage you to, at this point, allow the airport to continue,” she said. “We have the feedback from the community on those needs.”

Asked by Commissioner Sally Heyman whether even one MIA hotel was “still viable” for revenue generation, Aviation Director Lester Sola said that once airport operations resume there will be “significant” demand for added hotel space there.

There is still great demand for an existing hotel, built in 1959 in what is now Concourse E, which “provides an incredible amount of revenue,” he said.

“It was updated several times and oftentimes doesn’t have enough rooms for the amenities,” he said. “The answer is, airport hotels are very economically viable for the operation.”

Mr. Sola, who took over his department years after plans for Airport City crashed, said the project’s hotel designs were “dated” by a decade or more; however, commissioners could still direct staff to pursue the designs.

It could save time, said Dennis Moss, one of five commissioners who this year hit term limits.

Working with Odebrecht directly is out of the question, he said, “because of where they are in this community,” but finding a way to expedite MIA hotel buildings could help those losing their commission seats in November leave “footprints in the sand.”

At Ms. Edmonson’s request, Mr. Bovo told county attorneys to draft legislation directing staff to hold an open competition of bids to build up to two hotels at MIA.

The item, set to return within 60 days, would not preclude parties other than Odebrecht from submitting plans considered in prior negotiations, including plans designed by the company.