Advertisement
The Newspaper for the Future of Miami
Connect with us:
Front Page » Education » Downtown-Florida International University transit pick due 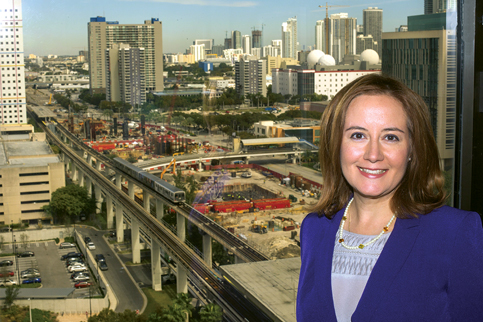 A nearly three-year project to determine what rapid transit upgrade bests fits the route between downtown Miami and Florida International University is rolling toward the finish line –most likely on rubber tires.

Today (4/23), the Miami-Dade Transportation Planning Organization Governing Board is to choose the county’s preferred transit mode for the route known as the East-West Corridor of the Strategic Miami Area Rapid Transit (Smart) Plan.

Based on evaluations by engineering firm WSP, county transportation officials recommend bus rapid transit (BRT) for the corridor, by far the cheapest and fastest upgrade to build despite running four miles longer than rail alternatives.

The 14-mile BRT route would cost $330 million to build – one-sixth of the cost to extend the Metrorail Orange Line westward ($1.94 billion) and 35% cheaper than commuter trains on rail lines owned by freight transporter CSX ($504 million).

WSP also looked at combining commuter rail and BRT for a hybrid approach but found it would cost $835 million to build and cause more environmental damage than any other option.

Further, because it would require purchasing trains and buses rather than one or the other, its operations, maintenance and vehicle costs would be greater than any other option.

The East-West Corridor is “the only major east-west connector in the county, providing limited connections to the major activity centers in the region,” an April 16 memo from TPO Executive Director Aileen Bouclé said.

BRT would cost the least per new rider, WSP personnel wrote, while moving “a comparable amount of people” as heavy and commuter rail.

Construction to accommodate BRT would take two to three years, just slightly less than for commuter rail. Metrorail would take six to eight years to build but would impact traffic the least of the three non-hybrid options.

All three modes would cause adverse environmental effects, consultants say. Commuter rail, because it would run on an existing, dedicated right-of-way, would cause the least, WSP said, despite high noise impacts to the surrounding area. BRT ranked second-best in the category, with possible parkland contamination and medium noise and construction impacts.

BRT ranked weakest in one key category: transit adoption. An examination by WSP of how likely each mode would be to attract new riders to the system found Metrorail would prompt 3.1% more potential riders to use it. Commuter rail would draw about 1.5% more.

If BRT is built, WSP projects 1.4% more would leave their cars at home to ride the new route.

Today, more than 8,600 residents ride buses on the corridor, whose peak morning traffic eastbound, end-to-end, is about 50 minutes, per Google Maps.

WSP noted that studies of the East-West Corridor date back to at least 1994, when transportation staff looked at a possible link between FIU and Miami Beach. The firm listed six other studies since.

Current work began June 13, 2017, with an agency kick-off meeting, about a year after the TPO board adopted the Smart Plan to advance the planning, development and environmental studies of six major commuting corridors throughout the county.

Selection of a locally preferred transit alternative for the Kendall Corridor will come last, as predicted by Jose Curbelo, chairman of the Citizens’ Independent Transportation Trust, the group that oversees the countywide half-penny tax meant to fund transit expansion here.

WSP cites FTA Small Starts grants, state contributions and local tolling dollars as additional financing sources. The future of MDX, the local agency that oversees the 836 and four other tollways in the county, remains up in the air amid a court battle with the Florida Department of Transportation and the state House of Representatives.

That situation, as well as funding issues in general, could be further exacerbated as revenues plummet during the novel coronavirus pandemic. MDX recently reported a 23.3% year-over-year revenue decline for last month and a drop of more than 50% traffic.

But because it will take less time and money to build, BRT on the East-West Corridor probably has the best chance at moving forward with adequate outside funding, said county Commissioner Eileen Higgins, whose district contains part of the route.

“Bus rapid transit gets the project into the federal Small Starts system, which makes it a realistic alternative for our residents – implementable and affordable while we’re all still living,” she said. “Five years from now, we can say we have it.”