Advertisement
The Newspaper for the Future of Miami
Connect with us:
Front Page » Business & Finance » Italy’s Florida business tied to the environment 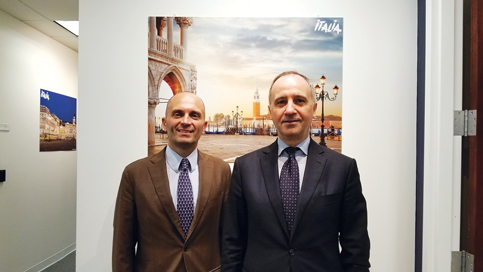 Trade between Florida and Italy rose by 5.4% in 2019, bolstered by a rise in technological, mechanical and culinary industries doing business in the Sunshine State. Within those sectors and others is an opportunity to broaden environmental protection efforts, Italian diplomats say.

Last year, exchanges of goods and services between Italy and the US exceeded $10 billion, according to Italy’s Ambassador to the US Armando Varricchio. In support of that boom, he said in an interview here, is a surge in Italian-owned businesses located stateside that support a workforce of more than 80,000 American jobs.

“There’s a growing number of Italian companies who not just bring here technology but also respond to the needs of a community with an even greater focus on sustainability,” he told Miami Today. “It’s something Italian companies are particularly keen of, and we are developing technology in different areas not just to match the new very strong and binding European criteria to protect the environment and consumers but … on the quality of life.”

By the end of this year, Italy aims to reduce its greenhouse gas emissions by at least 20%, including those of Italian-owned businesses here and around the world, and expand renewable energy use and energy efficiency at the same rate.
This “20-20-20” goal of the Italian “green new deal,” he said, stems from the European 2020 Climate and Energy Package, in which Italy is one 28 European Union participants.

A report by the European Data Journalism Network lists Italy as the largest and most industrious of 17 union members whose primary energy consumption is already below its 2020 targets.

At the national level here in the US, Italy continues its engagement with Italian multinational oil and gas company Eni and its Boston-headquartered utility, Enel, to support their continued move toward renewable production.

“They’re increasing their presence in the states to build power stations and spread technology that will allow reducing the emissions and also increase energy efficiency,” Ambassador Varricchio said. “This is an area where in the states there is great room for growth.”

Italy is rewarding comparatively smaller companies that do the same. In 2018, the Italian Parliament renewed the “Sabatini law,” which provides businesses that invest in new equipment, plants and machinery – from manufacturing tools and vehicles to air conditioning units – with strong tax incentives.

Much of that machinery and technology could come from Italy, “a leader in circular economy – the reuse of raw materials and waste recycling” and other like practices, said Cristiano Musillo, consul general of Italy in Miami.Italian businesses at the forefront of the initiative in South Florida, he said, include Hollywood-headquartered air conditioning and refrigeration company Castel US, renewable energy firm Acea International, lighting and electronics corporations Beghelli North America and Neri USA, car design firm and coachbuilder Pinifarina of America, and a passel of food and wine companies.

To reach them and others, the consulate uses its own network of contacts and cooperates with the Italy-America Chamber of Commerce Southeast, located in Brickell, whose areas of influence overlap with the consulate, with some 240 businesses as members – half of which are in Florida, Mr. Musillo said.

“It’s a huge number, and it’s increasing,” he said. “We involve them in order to feature all of these tools we have in our hands, to present these characteristics and expertise to our local counterparts.”

Worries that this mounting shift toward sustainability will be a drain on employment are unfounded, Mr. Varricchio said.

“On the contrary, it creates new job opportunities, new professions, new skills,” he said. “This is something our companies are well aware of.”

While US federal policies to combat climate change, enhance awareness, improve resiliency and boost uses of reusable energy aren’t as emphasized under the current administration, the ambassador said, individual states have picked up the slack – and not necessarily the ones some may assume.

“One of the most environmentally concerned states here is Texas, which is not necessarily [liberal],” he said. “We can see that what the new market and customers are demanding is more concerned on these needs – talk less and focus on what the market is asking [for], and this is what we’re doing.”