Advertisement
The Newspaper for the Future of Miami
Connect with us:
Front Page » Profile » Cristiano Musillo: Leading Italy’s efforts in Florida, Southeast, Caribbean 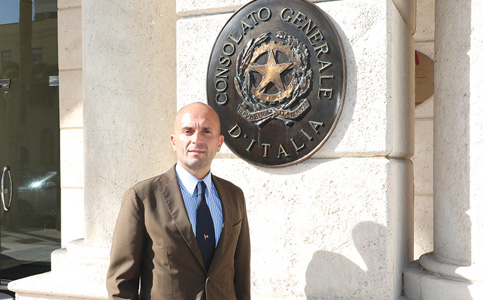 The name of the Consulate General for Italy in Miami is something of a misnomer, according to Consul General Cristiano Musillo, who this year will celebrate two decades of service as a foreign diplomat.

Though headquartered in Coral Gables, the office over which Mr. Musillo has presided since August 2018 has an expansive jurisdiction, encompassing Florida, Georgia, Alabama, Mississippi and South Carolina, as well nearly all of the Caribbean except Cuba and the Dominican Republic.

“It’s a huge part of the world with a lot of people living here, and it’s not so easy to manage all the problems that arise,” he said. “We succeed by having an established network of honorary consuls – approximately 18 honorary representatives in several parts of this jurisdiction, an effective network to help Italian nationals and create opportunities for businesses.”

In response to the earthquake that struck Puerto Rico in September, one such honorary consul took action, he said, to aid the more than 600 Italian nationals there and the local community and relay crucial information back to his office.

“It’s essential for us to have this kind of network,” he said.

According to its most recent figures, the Consulate General of Italy in Miami’s jurisdiction covers about 2 million Italian-Americans and almost 45,000 Italian citizens, the majority of whom – more than 38,000 – live in the Sunshine State.

Florida is also home to more than half of the Italian firms that operate in the southeastern United States, 118 of a total 248 that altogether created 12,896 direct jobs in the region as of last year.

As such, it should not be a surprise that exchanges between Italy and the region, particularly Florida, continue to grow rapidly, climbing in value by $404.5 million in just two years, according to US Department of Commerce figures.

Between 2017 and 2018, the trade balance between Italy and the southeastern US shot up 20%, bolstered by imports here of Italian machinery, eyewear and motor vehicles, and local exports of metals, gemstones, machinery and paper products, among other products.

And while numbers are still pending from last year, in 2018 alone more than 340,000 Italian business travelers and tourists came to Florida, adding nearly $1 billion to the local economy.

“The incredible increase in the trade exchange between Italy and the southeastern United States has especially been in Florida,” Mr. Musillo said. “There is a great demand for Italy and even better cooperation with businesses, the economic system and industry.”

To read the full article and the rest of the Miami Today issue, subscribe to e-MIAMI TODAY, an exact replica of the printed edition