Advertisement
The Newspaper for the Future of Miami
Connect with us:
Front Page » Profile » Gary Goldfarb: Drives trade and supply chain management to forefront 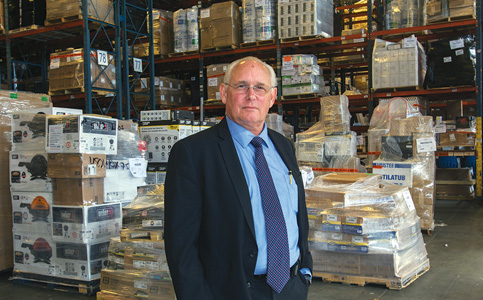 Every great international commerce hub needs someone like Gary Goldfarb, a leader in trade and supply chain management whose deep knowledge of the industry is matched only by his desire to further strengthen Miami-Dade County’s standing on the world trade stage.

As chief strategy officer for Interport Group of Companies, he is responsible for creating new products for a top supply chain management company with a growing array of offerings, from foreign trade zones, customs-bonded warehousing and inventory control to distribution, fulfillment and duty drawback expertise.

He was instrumental last year in establishing Compra Fora, a pre-clearance arrangement between the county and Brazil, its biggest trade partner, for which Interport provides warehousing, clearance and packaging, among other services.

That deal is just one of many advancements Mr. Goldfarb has brought South Florida since beginning his career here in 1974. While some have been slow to realize Miami-Dade’s importance to global trade, he said, he’s known it all along.

“People come from all over,” he said. “The mix of those cultures allows us to be the trade ambassadors for the world, and so long as there’s trade and trade issues to resolve, Miami is going to be smack in the middle of things.”

Local schools have caught on, some with his help. He aided both Florida International University and Miami Dade College in launching trade and logistics programs. And through the Beacon Council’s One Community One Goal initiative, five high schools in Miami now teach courses on the industry.

“That is all very important, because we are a trade community like Hong Kong,” he said. “We are 25% of the workforce here, 30% of the international business trade. We are the capital of trade for the Americas, and we’re teaching the rest of the world.”

Mr. Goldfarb, who is to take over as chairman of the Beacon Council in early November, sat down with reporter Jesse Scheckner.

One Response to Gary Goldfarb: Drives trade and supply chain management to forefront