Advertisement
The Newspaper for the Future of Miami
Connect with us:
Front Page » Communities » Suit aims to wrest control of historic Olympia Theater from Miami 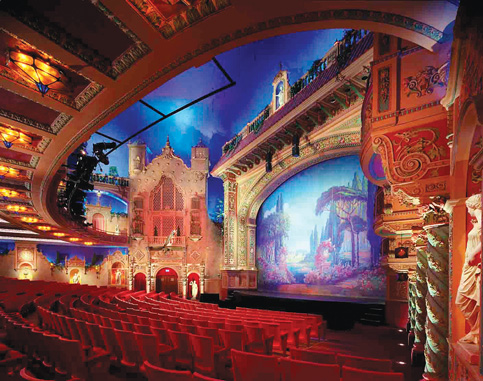 With the historic Olympia Theater in the heart of downtown seemingly in limbo, the City of Miami is facing a lawsuit over its handling of the property.

Last month, The Maurice Gusman Cultural Center for the Performing Arts Inc., a dissolved Florida not-for-profit corporation, sued the City of Miami for its ownership of the Olympia Theater at 174 E Flagler St. The theater is managed by the not-for-profit Olympia Center Inc.

Central to the plaintiff’s suit is the claim that when Maurice Gusman donated the Olympia Theater to the city back in 1975, it was done under the condition that the theater be managed by Off-Street Parking of the City of Miami, the semi-autonomous agency better known as the Miami Parking Authority.

The ornate Olympia Theater opened its doors back in 1926, serving as a venue for silent films and containing the city’s first air-conditioned building. It was one of the grand motion picture palaces in the early days of sound film. In the early 1970s, with theaters in decline, Mr. Gusman purchased the building and renovated it as a home for the Miami Philharmonic Orchestra before giving it to the city.

Mr. Gusman, the document states, “did not believe that the City of Miami Commission or any third party designated by it would properly maintain the Gusman Property so he specifically required as part of the transfer to the City of Miami that the property, at all times, be managed by the members of the Off-Street Parking Board or their successors, whom he believed would be better suited and well qualified to manage the property in a manner which would preserve the legacy for the property which he sought to maintain for generations to come.”

According to the suit, the special warranty deed by the plaintiff contained a restrictive covenant stating that the theater was to be administered by the members of the Off-Street Parking Board or their successors. An ordinance was enacted at the urging of Mr. Gusman and Mitchell Wolfson Jr., a member of the board of the Department of Off-Street Parking, to memorialize the continuous management of the MPA.

The lawsuit claims those terms were violated in August 2011 when the MPA forfeited its oversight and management of the property.

Timothy Barket, attorney for the Maurice Gusman Cultural Center, said because the covenant has been breached, the building’s ownership should revert to the plaintiff. He said the center’s three directors, one whom was the late Mayor Maurice Ferré, had passed, but since then, three of Mr. Gusman’s grandchildren had been appointed as directors of the not-for-profit after petitioning in circuit court.

In a brief email response, the city attorney’s office stated, “we look forward to resolving this

The Olympia Theater has had various suiters over the years, including Miami-Dade County, the Bayfront Park Trust and a subsidiary of the Related Group.

The latest round of negotiations over the property had seen the City of Miami Commission opt for Miami Dade College to manage the historic theater. However, the college announced earlier in the year that it had decided to no longer pursue a management agreement with the city.

In late June, the city commission rejected an unsolicited bid by real estate asset management company New Urban International to acquire the theater and transform the rooms above into a hotel. Commissioner Keon Hardemon suggested the city request proposals were negotiations with the college to fall through.

Architect Richard Heisenbottle, who was involved in one of many interior restorations at the theater several years ago, estimated that repairing the theater, mostly its exterior, would cost about $20 million.

A discussion over the Olympia Theater had been scheduled for commission meetings in September, October and November, with the city commission indefinitely deferring the item at the Nov. 21 meeting.