Advertisement
The Newspaper for the Future of Miami
Connect with us:
Front Page » Opinion » Railway deal is like stadium: no runs, no hits, lots of errors

Railway deal is like stadium: no runs, no hits, lots of errors

You’d think administrators would iron out all wrinkles and not fill in blanks after the vote.

You’d think all would be wary of side deals on voting day and of unwritten promises.

Finally, you’d think that officials could pinpoint the deal’s impact.

Those are minimal expectations when committing Miami-Dade County to a high-ticket utility geared to serve residents for many decades.

If we thought those lessons were learned in a failed stadium deal that all today disavow, guess again. As the county made a deal for a Virgin Trains USA station in Aventura last week, many of the baseball deal errors resurfaced.

A decade from now we can judge whether errors in the rail deal equal those at the stadium or whether, despite a flawed process, it somehow gets on track. Miracles do happen.

The Marlins Stadium deal actually had a better start than the Aventura station. Elected officials got a fat binder of stadium documents weeks before voting, although key elements came later.

The deal with the cash-bleeding private railway first surfaced only 11 days before the vote and the 157-page document came to the public less than an hour prior to the noon meeting. Study before voting was impossible. 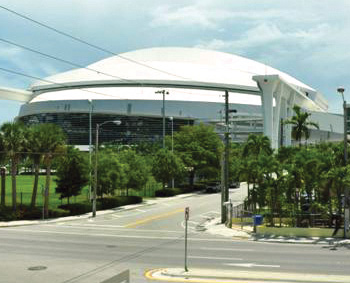 “Billion” was never uttered in a $3 billion deal. The word later shocked commissioners, who’d heard nothing as high as $500 million in talks. Nor were they clear that every penny the stadium would yield on everything from tickets to concessions to advertising would go to the Marlins, not the county.

In the case of the railway, commissioners were told of a $76 million station and that the county could have train service without paying operating costs that public transit requires. But the great financial unknown was a comment by Mr. Giménez that the county may subsidize the for-profit railroad’s operations, which are to roll as far as Orlando. An annual subsidy could total far more than a station.

The baseball hit-and-run was a last-minute vote on $3 billion in financing that has three decades to run – interest so high that each year for six years in a row the county will repay more than total borrowing on one part of the deal. It must repay $118 million a year on a $91 million loan. We can’t make that stuff up: it was in data not unveiled until after the vote.

In Friday’s deal, commissioners were told the station land was only available until Tuesday – use it or lose it. We’re sure the Virgin folks had the deal cooking long before that, but deadlines are great negotiating tools.

Much of the deal has been left to six months of talks between the county and Virgin. But the commission has already voted, which undercuts county negotiators.

During stadium talks lobbyists met commissioners one by one, pledging area jobs or whatever behind closed doors. Since commissioners now disavow the contract, we can assume they didn’t get all they hoped for.

Some pledges were casual: the team would spend big on players, it would win, attendance would soar, the Little Havana area around the stadium would prosper. None happened.

On Friday, mayoral candidate and Commissioner Jean Monestime, who was elected after the baseball deal, switched from no to yes when he was promised that any housing built at the station site will be workforce housing. But since Virgin hasn’t agreed to build any housing there, that has no more force than the promise that Little Havana would prosper. That’s not a big giveaway to get the final vote to seal a deal.

The stadium deal’s yield was far from anticipated. Commissioners heard that pitiful attendance at the former stadium would soar in a covered ballpark. The roof was the only kept promise: there’s been only one rain delay (a roof leak). But attendance in fact plummeted from a 19,007 average the last year at the old ballpark, 28th of the 30 teams, to 10,016 this year, lowest of all.

Other forecasts too were off base. Spending on players fell, the team hasn’t won, and Little Havana is unchanged.

Even Miami’s retail space in stadium garages has been a bust: after eight years, the city hasn’t leased it all.

And while the contract required that that the county get a fixed percentage of what owners collected if they sold the team, in two years since the sale the county hasn’t gotten one cent of those many millions.

In the railroad deal, how many tickets Aventura commuters will buy at reduced rates is a mystery because to get lower prices commuters must book at least two days in advance. That’s unique for daily commuter runs. Then again, commissioners don’t know the ticket price by the time the station opens or when it will open,

They also don’t know when Brightline will allow the public’s Tri-Rail to use its tracks and downtown Miami station. Tri-Rail is waiting patiently. But if you’re Brightline, why help a competitor?

Daniella Levine Cava, a mayoral candidate who opposed the rail deal, lamented in a press note that it was “hastily put together, and left us with more questions than answers.” She also noted that by signing off, the county now has no leverage to negotiate fares. Mayoral candidate Xavier Suarez also voted no; Joe Martinez, who had voted against the stadium and hasn’t filed to run for mayor, walked out in protest.

What we wrote before the 2009 stadium voting applies to the rail depot: we’re pleased to have the infrastructure, but the ill-considered deal didn’t close loopholes and is likely to work to taxpayers’ detriment.

Unlike the stadium, however, county officials still will try to tighten some of those loopholes. In the face of stiff odds, they need to highball an outcome that puts the public in the front car. We don’t want to be railroaded again into being the caboose.

3 Responses to Railway deal is like stadium: no runs, no hits, lots of errors