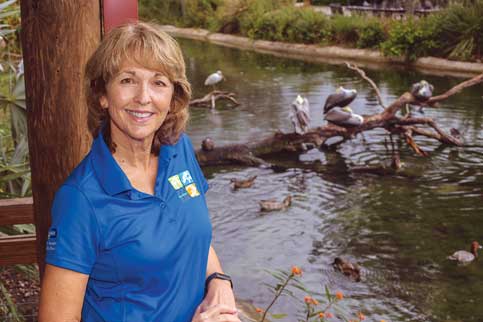 Zoo Miami, celebrating its 40th anniversary next July, wrapped up fiscal 2019 shy of its long-held goal of a million annual visitors, but Director Carol Kruse reports success at meeting or exceeding other major benchmarks.

Exact figures aren’t yet available, Ms. Kruse said, but the total number of admissions through Sept. 30 is around 910,000.

“We know we could achieve our inspirational goal if admission were free,” she said, “but last year when we participated in Smithsonian magazine’s free museum admissions day we found it was not sustainable for us.” The admission-free day caused traffic jams, long lines at exhibits and complaints from participants, Ms. Kruse said, so the zoo’s administrators are looking at other strategies to expand attendance consistently throughout the year.

Meanwhile, revenues for the attraction exceeded expectations over the past year. Because Zoo Miami – also known as Miami-Dade Zoological Park and Gardens – is a public institution, about half of its budget comes from county funding.

“The other half,” Ms. Kruse said, “is earned income. The majority of this come from admissions, the rest from food and beverages, concessions, gift shop earnings, fees for animal encounters such as our popular giraffe feeding program, monorail fees, stroller and bike rentals and so on.”

Zoo Miami’s resident animals are grouped by geographical territories, with several species co-existing in habitats that mimic their homes in the wild. One of the newest exhibits, Ms. Kruse said, is Florida: Mission Everglades, which simulates environmental conditions in the Everglades. Its inhabitants include native Florida animals such as the roseate spoonbill, the Florida panther, black bear, burrowing owl, gopher tortoise, bald eagle, American crocodile, American alligator, Florida box turtle and more.

Many, Ms. Kruse said, were collected during the zoo’s annual amnesty day, when owners of exotic, often illegal pets can drop them off, no questions asked. The goal of this exhibit, she said, is to encourage locals and tourists to understand and support wildlife and conservation efforts in the Everglades.

New arrivals are also a draw, Ms. Kruse said. While many are obtained from other accredited zoos, she said, a fair number are born at Zoo Miami. Notable births in the past year include a giraffe, a litter of highly endangered African Painted Dog puppies, and a very rare Greater One Horned Indian Rhinoceros – the first successful birth of this species resulting from induced ovulation and artificial insemination.

In addition to a 40th anniversary party on July 4th, the coming year will usher in a number of new initiatives and events, said Cindy Castelblanco, director of marketing and integrated communications. For example, a capital campaign will soon be announced to fund a new veterinary hospital on the grounds.

From Jan. 18-June 14, 2020, she said, a new attraction called “Dinosaurs Live!” presented by Metro By T-mobile, will let visitors “walk among life-sized animatronic dinosaurs in a zoo-wide Jurassic adventure.”

On April 25-26, Ms. Castelblanco said, “we will be hosting a special party for the planet to celebrate the 50th anniversary of Earth Day.

“Another big improvement coming up is the opening of our first Conservation Action Center in the summer of 2020. It will include a museum-quality exhibit on why conservation matters, what it takes to save a species, and what individuals can do to preserve wildlife and nature.”

Zoo Miami – the fifth largest zoo in the country – rated high on a number of “best zoos” lists this year, collecting kudos from US News & World Report, Readers Digest and USA Today.