Advertisement
The Newspaper for the Future of Miami
Connect with us:
Front Page » Top Stories » Consumer prices in South Florida rise faster than nationally 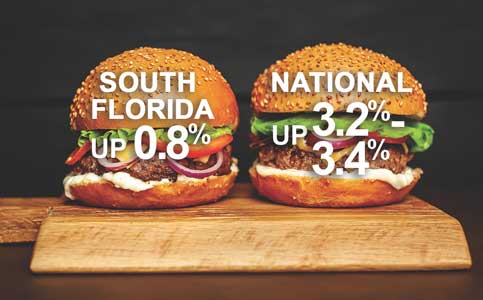 Consumer prices in South Florida rose more quickly than those nationally in the 12 months through August, two new reports from the US Bureau of Labor Statistics show.

The increase in consumer prices overall was 1.9% for the 12-month period in the Miami-Fort Lauderdale-Palm Beach region, while in all urban areas nationally the increase was 1.7%, the reports show.

Within those general increases, however, some prices both rose far more and others actually decreased, depending on the spending categories.

In South Florida, for example, gasoline prices dropped in double-digit percentages, with all gasoline falling 11.3%. Within that category, unleaded regular gasoline prices fell 11.4% during the year, unleaded midgrade fell 11.8% and unleaded premium fell 8.3%. In all urban areas of the nation, the price of gasoline overall fell 7.1% in the 12-month period.

That falling price of gasoline helped drive down the cost of transportation in South Florida by 2.8% in the 12 months, according to the regional report from Janet Rankin, regional commissioner of the Bureau of Labor Statistics. The national summary issued last week did not offer comparable figures.

The only other broad category where costs in South Florida declined in the 12-month period was recreation, with costs down on average 0.2%.

Within the shelter category, in South Florida the cost of renting primary residences increased an average of 4.2% while the owner’s equivalent of rent rose 4.7%.

The average cost of medical care in South Florida increased 1.4% for the year.