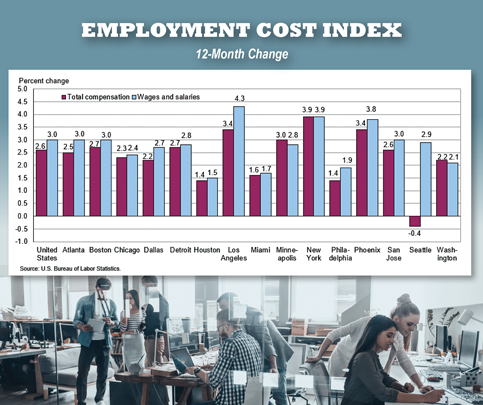 Both wages and salaries and the broader figure of total compensation costs rose far more slowly in South Florida than in the nation as a whole over the 12-month period that ended June 30, a new report from the US Bureau of Labor Statistics reveals.

Wages and salaries rose 1.7% in South Florida for the 12 months, while a national look at major metropolitan areas showed a rise of 3%.

A year earlier, the 12-month gain nationally was 2.9% but the South Florida gain was then higher than the national rise, at 3.1%.

The report from Janet S. Rankin, regional commissioner for the Bureau of Labor Statistics, did not attempt to explain the reasons for any of the changes but simply reported them.

As the chart shows, the increases in both wages and salaries and in total compensation were lower here than in most of the 15 large metropolitan areas that the federal agency surveyed.

While in Seattle total compensation costs actually fell 0.4% and in Houston and Philadelphia the rise was 1.4%, the next smallest rise was 1.6% in South Florida.

The increase in wages and salaries had South Florida even lower on the ladder, second-lowest at 1.7%, ahead of only Houston at 1.5%.