Advertisement
The Newspaper for the Future of Miami
Connect with us:
Front Page » Top Stories » Public-private development could transform Palmetto Bay 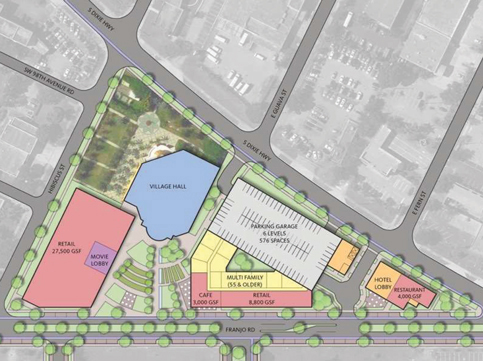 Palmetto Bay will wait until next month to decide whether to proceed with a public-private project that, if approved, promises to transform the village’s downtown area into a modern city center.

Village officials and residents June 3 discussed the estimated $72 million development, which would redevelop about 4.6 acres off US 1.

But after roughly 90 minutes of talks, the village council voted 3-1 to punt further discussion with proposer i3 Interests LLC to July 15, citing an unfinished redrafting of the village’s downtown development code and a need to better define some of the proposal’s features.

Based in Houston with an office in Miami Beach, i3 Interests submitted an unsolicited proposal to the village in 2018 to redevelop 2.6 acres at 9705 E Hibiscus St., where Palmetto Bay’s village hall and police station stand, among other structures.

Palmetto Bay responded by requesting proposals for a public-private partnership. That, according to a report in South Florida Business Journal, prompted two neighboring landowners – Hagan Properties, which owns 1.5 acres; and Dixie 176 Corp., which owns 20,300 square feet – to offer their sites as part of the development.

The project then became subject to a village “cone of silence” hush rule, barring village employees from discussing details with the public.

■An expanded village hall with a relocated entrance.

■A mid-range hotel run by a major operator.

■An up to six-story parking garage.

“All of the economic trending feasibility studies – and we’ve conducted some [here] – they’ve all demonstrated a positive opportunity for development here at the village,” Ms. Pinedas said, adding that Palmetto Bay’s “most prominent feature [on the] US 1 corridor [now] is a high concentration of car dealerships.”

Where the modern city center would rise, she said, there now is “no group of similar businesses,” and the appearance of the area “is not ideal, buildings and surroundings [lack] character, [and there are] oversized parking lots and little landscaping or infrastructure improvements.”

As a result, she said, businesses there “fail at a rapid rate in substandard buildings.”

Further, she said, the NAI plan omitted costs for developing a hotel and had no entertainment, senior housing or village square components.

None of the meeting’s attendees asked Ms. Pinedas or Mr. Silva why there was such a disparity in the quality of the two proposals, and neither gave reasons or guesses.

Mr. Joubert told the council that, if the project is approved next month, predevelopment processes would take about a year before construction begins.

During that time, he said, i3 Interests – comprised of architecture firm Gensler and Burton Construction – would interview contractors specializing in the project’s various parts.

“We want to make sure that we get the right people to be constructing each of the major components,” he said. “[Burton] would manage that process.”

Mr. Joubert said cost estimates are based on projections made by contractors that Gensler contacted about the project, whose funding would come from three sources: private money, bank loans and village dollars.

“That doesn’t mean the village has to write a big check,” he said, listing land leases or parking revenues as alternate ways for the village to contribute funds.

But the “big check” option is also on the table, he continued, as is the case in Homestead, where i3 Interests is building a $51 million mixed development with similar structures, as well as a tech-driven “Cybrary.”

Homestead’s contribution to the “Homestead Station” project, he said, is $33 million.

Palmetto Bay Mayor Karyn Cunningham later told Miami Today that she wasn’t interested in having Palmetto Bay spend that much.

“If we’re able to get dollars from the state for the parking component… I would consider that our contribution,” she said. “Until I better understand where we’ll be talking about floating bonds and increasing taxes, [spending village dollars on the project is] counterintuitive to what we’re trying to do as a community.”

Ms. Cunningham joined Councilmen Patrick Fiore and David Singer in voting to defer further talks with i3 Interests to next month.

Mr. Singer at first had urged the council to OK entering into preliminary negotiations with the developer, calling the area targeted for redevelopment “blighted” and a failure to move forward by the council “disgusting.” He relented once it was clear not enough support on the dais existed for a same-day approval.

Councilwoman Marsha Matson, the sole vote against the deferral to next month, argued it would be more prudent to wait until the village finished rewriting its code before setting a decision date.

Ms. Matson said she’d “respectfully disagree” that the area was blighted and told Mr. Singer he should look up that descriptor’s definition. And because Palmetto Bay is a qualified Opportunity Zone, she said – meaning businesses developing in the area, as well as taxpayers investing in those developments, stand to receive significant capital gains tax benefits – there will be no shortage of development interest there.

“I look at it as a treasure-to-be,” she said. “This presentation is the cart before the horse. We’re working on rewriting our code, [and] we should not have the proposal just outside the door.”

Palmetto Bay resident Chuck Bradshaw said the added time would allow Palmetto Bay to better inform his neighbors, many of whom aren’t aware of the “huge undertaking” the village is considering.

“Let’s just really do a good job of making sure everybody understands this project and all its implications,” he said.

And that’s the point, Ms. Cunningham said: residents should be excited – not apprehensive or, worse, unaware – by what could be coming to downtown Palmetto Bay.

“If I choose to vote to move forward with negotiations later with the project,” she said, “it will be something that this council and the community feels enthusiastic about.”