Advertisement
The Newspaper for the Future of Miami
Connect with us:
Front Page » Government » Coconut Grove Playhouse fight may end up in court

Coconut Grove Playhouse fight may end up in court

Written by John Charles Robbins on May 28, 2019
Advertisement 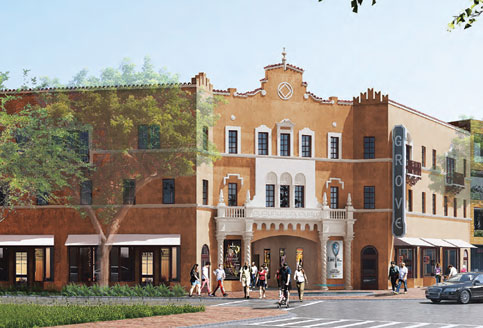 The battle over the fate of the long-closed Coconut Grove Playhouse lingers on.

Miami-Dade County, garnering approval of its restoration plan from the Miami City Commission on a split vote, saw its hopes dashed May 17 when Mayor Francis Suarez vetoed the approval, and then on May 23 the commission failed to override the veto.

County officials vow to continue the fight, which is expected to mean a lawsuit against the city.

“We remain confident that the County-FIU project will prevail in the forthcoming appeal and that history, theater and the residents of our community will be the real winners of the Coconut Grove Playhouse project,” said County Mayor Carlos Giménez in a statement posted on the county’s website devoted to the playhouse.

The state owns the theater and has leased it to the county and Florida International University. The lease calls for site restoration and a new modern theater run by GableStage.

The county’s plan would restore the front of the theater, demolish the larger auditorium and build a new 300-seat theater.

Opponents continue to fight for restoration of the entire structure including the 1,000-seat auditorium, and found a sympathetic audience with city Commissioners Ken Russell and Keon Hardemon.

They were “no” votes on May 8 on a resolution granting the county’s appeal of a March 5 decision by the city’s Historic and Environmental Preservation Board (HEPB), which had voted 6 to 4 to deny the county plan for the aging playhouse at 3500 Main Highway.

The commission’s 3 to 2 vote reversed the March 5 decision of the HEP board, and freed the county to proceed with its plan.

That was until Mayor Suarez’s veto, announced outside the playhouse May 17.

After another long public debate both for and against the county’s plan on May 23, a motion to override the veto died. A vote of 4 to 1 was necessary to override.

In a letter explaining his veto, Mr. Suarez wrote, “We must uphold historic preservation requirements in our community, and the Coconut Grove Playhouse should be no exception. The Playhouse is ‘a signature building reflecting the heyday of Coconut Grove.’”

He went on: “Based on the record before the HEP Board and Commission, the County’s proposal would jeopardize the National Register of Historic Places designation for the Coconut Grove Playhouse because the proposal is not consistent with the guidance provided by the Secretary of Interior’s Standards for the Treatment of Historic Properties.”

In a letter to commissioners dated May 22, Mr. Giménez urged them to override the veto.

“Mayor Suarez’s veto message overtly ignores key facts, applies the wrong law, and neglects the detailed record,” wrote Mr. Giménez. “Your action will make the difference between something happening now or nothing occurring for years, and perhaps forever, to rehabilitate and revitalize this important historic, community, and cultural site.

“Overriding the veto and approving the County’s application for a Certificate of Appropriateness is the right thing to do. The County-Florida International University project respects and restores the architecturally significant portions of the Playhouse, honors the historical significance of the site by returning great dramatic theater to this place where theater began for our community, and creates a more open space that celebrates the village scale and ambiance of Coconut Grove and respects the West Grove.

“Lost in much of the commentary about our project is that the County plan preserves the entire 1927 historic front building: the very image that has been identified as the ‘Coconut Grove Playhouse’ since the theater opened as a silent movie house in 1927. Our plans show the complete, historically-accurate restoration of this iconic front building, which is the only portion of the structure that is ever featured in photographs lauding the glory of the Playhouse,” Mr. Giménez wrote.

At the May 23 meeting, Mr. Giménez said further delays would cost the county another one to three years and “probably the state will take it back and I don’t know what will happen after that.”

Also left in limbo by the latest action is the companion project of the Miami Parking Authority to build a municipal garage lined by retail spaces next door to the theater.