Advertisement
The Newspaper for the Future of Miami
Connect with us:
Front Page » Profile » Ed Williamson: Steering team at US’s No. 4 volume Cadillac dealership 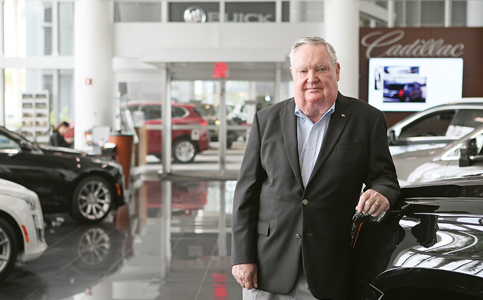 Ed Williamson II characterizes his role as president and CEO of Williamson Automotive Group, the No. 4 volume Cadillac dealership in the nation and the No. 1 Buick franchise in the Southeast, as “being in charge of the climate.”

“And we sell more [General Motors vehicles] than Buicks,” he says.

His isn’t a position concerned with the minute details of a family business that evolved over 90 years across three generations, including more than five decades in South Florida.

Rather, he says, his job is to steer the company’s overarching mission, upholding service and sales standards that continue to earn it industry and community accolades every year.

“We’ve had very good general managers for years. It’s their job to oversee the nuts and bolts. And the parts and service departments are closely interrelated, as are the parts department and body shop,” he says. “Getting all the people to work together all the time – that’s what I really do.”

The key, he says, is fostering in his workforce a prioritization of consideration, goodwill and pride in service – attributes he and his family carry into civic and philanthropic efforts with organizations like the Greater Miami Chamber of Commerce, Orange Bowl Committee, Beacon Council, University of Miami Board of Trustees, United Way and Yes Institute, among many others.

“So much is talked about pricing in the car business, but it’s a customer care, friendliness, reliability, golden-rule-type of business,” he said. “Our employees treat each other and our customers with a lot of respect. That doesn’t happen in a lot of businesses, and our customers like doing business with us and keep returning.”

Mr. Williamson sat down with Miami Today reporter Jesse Scheckner. The interview, recorded by Jahmoukie Dayle, can be found Friday at https://bit.ly/2UdTyGr.

One Response to Ed Williamson: Steering team at US’s No. 4 volume Cadillac dealership