Advertisement
The Newspaper for the Future of Miami
Connect with us:
Front Page » Government » Colombia’s envoy in Miami eyes technology 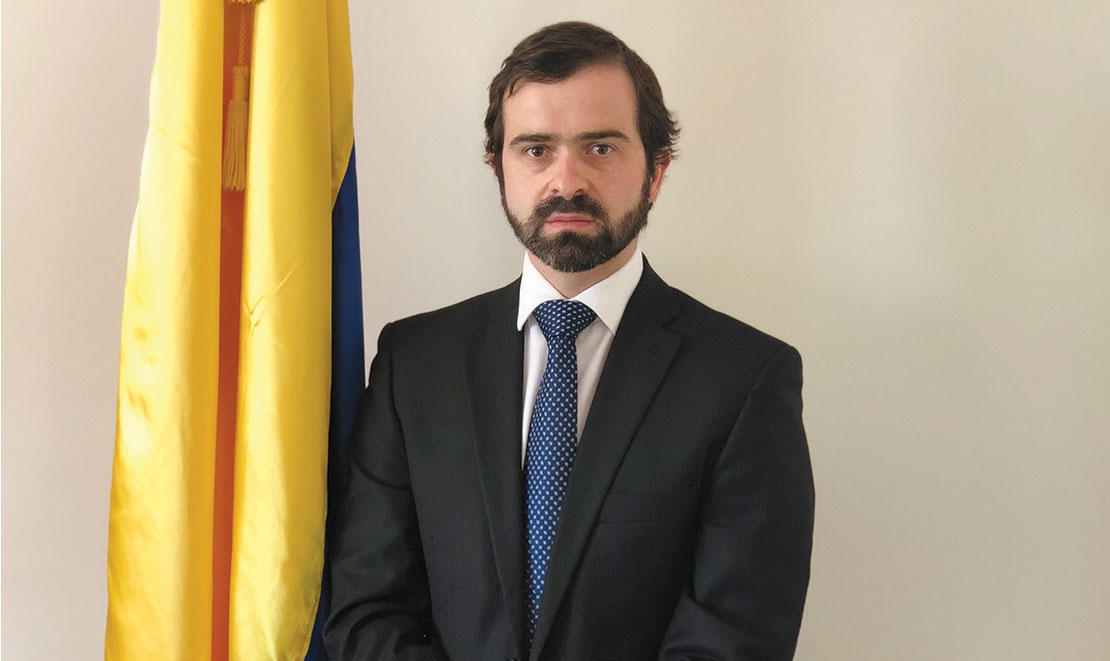 Pedro Agustín Valencia, Colombia’s general consul here since February, sees technology as integral in servicing the high demand for his services.
The consulate at 280 Aragon Ave. in Coral Gables feels the demand. On a typical afternoon, each cubicle is booked, with 11 employees meeting with nationals applying for Colombian documents. About 20 more wait, among 300 to 350 who visit daily, the consulate says, most bearing to three requests.

The consulate provides a range of services to 15-plus Florida counties. Nationals can vote there in presidential elections; apply for their cédula, an identification document similar to a social security card; and order a standard passport for $145 or emergency passport for $116.
Civilians from countries from which Colombia requires a visitor, migrant or residential visa also frequent the consulate. Cecilia Tirado Abad, who oversees travel visas, says Cubans residing in the US and Haitians come for visitor visas, though US citizens don’t need a visa to stay less than 90 days.
Colombian consuls general stay here a maximum of four years, during which Mr. Valencia plans to improve service as he sees “where the gaps exist and how can we close those gaps.”

The immediate next step focuses on readjusting operating hours. He also plans to encourage more visitors to come by appointment, registering on the consulate’s webpage, as opposed to just walking in.

“People that do not come with an appointment tend to wait two to three hours, depending on the amount of appointments,” he explained.
The two-year goal is to kick start Más y Mejores, or More and Better, an online service that lets visitors apply for certain documents through a webpage administered by the consulate as opposed to traveling there, saving, for example, a 6½-hour roundtrip from Sarasota. He also plans to allow more services to be paid with debit and credit cards, decreasing the use of money orders.

“I want to leave the consulate with a solid structure and control, a satellite that is easy to govern,” Mr. Valencia said. “Second, I want to convene the community, that we Colombian nationals living abroad and working together can have better results.”

Mr. Valencia will be looking at results of the 2020 US Census as a marker for crafting further strategies, to gauge what Colombians residing in Florida need. He’s urging all Colombians, even the undocumented, to reply to the census, which is confidential, even barring US government agencies or courts from seeing an individual’s responses. The Census Bureau confirms it uses the information solely for statistical purposes.

Americas Community Center founder and Colombian national Fabio A. Andrade predicts the census will report 1 million Colombians dwelling in Florida, with about 20% undocumented. He said he understands from a recent poll that immigration is a major problem among current Colombian residents.

“That tells us that there is an immigration issue due to the fact that it is not popular to talk about the undocumented,” Mr. Andrade said. “We have an issue with narcotics and persecution and the terrorists in Colombia continues to pursue people [yet] it is no longer recognized by the United States as political asylum. They are in limbo in regards to their immigration status.”

Consulate officials also report a growing trend of Colombians having dual Venezuelan citizenship and trying to renounce their Colombian citizenship, assuming that as Venezuelans they’ll be granted political asylum.

Mr. Andrade says that assumption is wrong: “I did not know that was happening. It has been identified at the consulate. That is a concern that we have, to make sure people understand that is not really going to be a given that you are going to be a Venezuelan and that you are going to get political asylum, because Venezuelans are not getting political asylum. They are getting a temporary delay on their process to be able to do it.”

Mr. Valencia looks forward to an accurate census headcount next year, but in the meantime looks at how to best marry technology and consular services. He looks at the examples of other consulates in Miami, listing up to four field trips thus far. He searches out consulates that have a high number of visitors and technological services.