Advertisement
The Newspaper for the Future of Miami
Connect with us:
Front Page » Real Estate » Tower begun in 2006 has 32-story completion plan 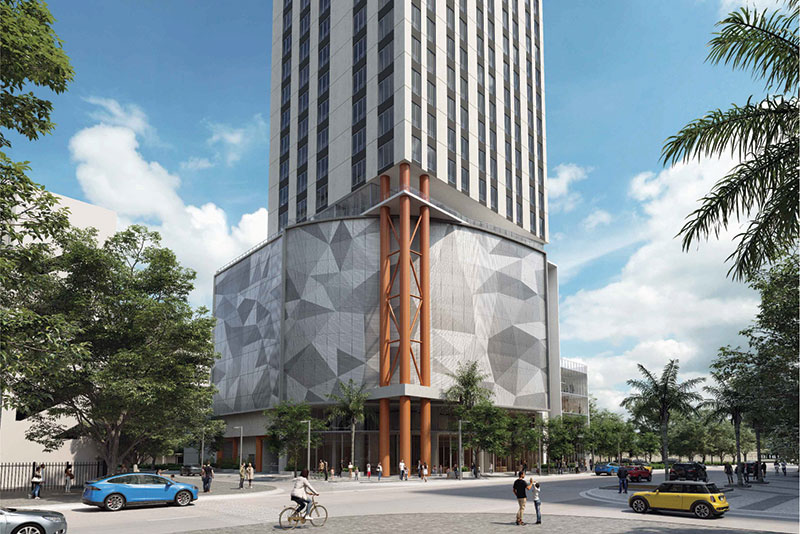 A downtown tower project that stalled after the foundation was built in 2006 and remained undone for years has a new owner-developer with big plans for completion.

The new project is called Krystal II and was applied for by Charlesville Dev. Corp. representing BH 18 Investments LLC, as applicant, and Krystal Invest Solution LLC as owner.

The city’s Urban Development Review Board considered the project Feb. 20. Members had questions and concerns about the scope of the project, and owner-developer Paul Murphy agreed to come back next month with a more detailed plan.

The property is at 530 NW First Court. Mr. Murphy submitted plans for a 32-story tower, with 154 residential units, 79,180 square feet of offices and 4,400 square feet of commercial-retail space.

Parking in the pedestal would handle about 251 vehicles and have room for 52 bicycles.

The application says this multi-use building will utilize a partially built 4.5-level concrete garage podium; have the lobby, loading commercial space and service area on the first floor; parking and common areas on floors 2-4; parking on floors 5-8; amenity and pool deck on floor 9; office space floors 10-19; and residential units on floors 20-32.

Iris Escarra, an attorney representing the developer, told the board about the history of the property, which is at the southwest corner of Northwest First Court and Sixth Street.

An earlier owner had an approved plan for a tower on the site, approved under the city’s former zoning code before the enactment of Miami 21.

The concrete podium or foundation has sat unfinished more than a dozen years, said Ms. Escarra, and the property was sold last year.

The site has been an eyesore for such a long time, she said, that the new owner is excited about completing the construction, with plans to incorporate the existing podium.

Attorney Brian A. Dombrowski, representing the developer, wrote to the city about the project.

He said the garage structure would be screened at the ground floor with habitable space including retail space.

“The Project’s design responds to human scale and is compatible with the surrounding area; utilizing the vacant structure that has been a blight on the neighborhood for years,” he wrote.

The letter lists proposed modifications to the former project, including:

■Relocate the amenity floor from the roof to the top of the podium.

■The tower above the podium has been squared in order to comply with the Miami 21 setback requirements on the principal and secondary frontages.

■The project has been brought more into compliance with Miami 21 from the project previously approved.

Roxana Tillit, the building designer, told the board the residences will be two-, three- and four-bedroom units.

The building architect is Marie Mihalik.

“We tried to make the building participate with the street as much as possible,” said Ms. Tillit.

Later in the meeting, Mr. Murphy told the board the plan may change as he considers ways to add more residential units, instead of some floors being for office uses.

Board member Willy Bermello said he’d visited the property to see the existing podium there. He voiced concern about the new plan versus the old plan, and said he worried the developer would come back with major revisions in order to incorporate the existing concrete structure.

The previous plan had a swimming pool on the roof, he said, “and I want the pool off the roof.” Relocating the pool to the top of the podium-garage levels relieves tremendous weight and stress off the top of the tower, he said.

Mr. Murphy said he wanted to construct a building with more than 300 residences, but was informed he cannot do that.

He still hopes to construct a building with smaller residential units, for workforce housing, and provide about 231 units.

Mr. Murphy said studies determined the foundation would allow no more than 32 floors.

Mr. Bermello was also critical of three columns or pillars proposed for the rounded corner of the podium.

Mr. Murphy said an engineer suggested adding one column on the corner for added support and stability, and then the architect said “let’s make it interesting” and designed three columns.

Board member Anthony Tzamtzis didn’t like the look of the proposed tower, on top of the planned finished podium.

“The appearance of the tower needs a lot of help. It appears mostly as an office building. There are no balconies. There is no differentiation,” Mr. Tzamtzis said.

He added, “Using the existing structure is an interesting idea but I don’t agree with the execution.”

Chairman Gerald Marston reminded board members it isn’t their role to redesign projects for developers but to examine plans and offer suggestions.

However, he added, “Every building needs a base, a middle and a top. This doesn’t have that on top.”

Mr. Murphy voluntarily agreed to consider the board’s comments and concerns and return in March with a more definitive plan.

Mr. Bermello said, “I think the project can be salvaged … I want to support your project.”